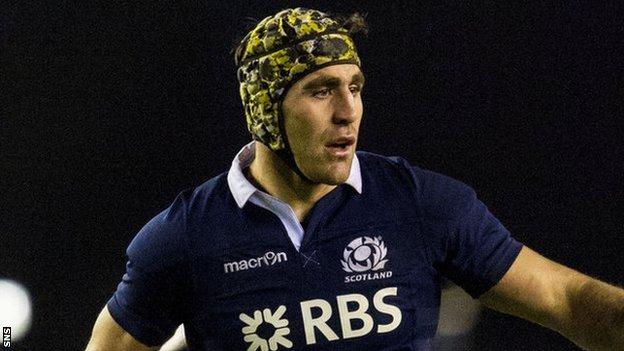 Kelly Brown has been told he will keep the Scotland captaincy if he proves himself their best open-side flanker.

Head coach Scott Johnson has named the 31-year-old Saracens skipper every time he has played.

But the Australian has refused to make the appointment permanent - until now.

"I've told Kelly to his face - and there's no use running away from it - if he is good enough to get in the starting XV, he will lead the team," said Johnson.

"But we are only viewing Kelly as purely a number seven now. The six and the eight roles we will leave to other people.

"But he has to cement his place at number seven.

"If he is good enough to do so, he will captain the team. If he's not, we will look for someone else."

Johnson believes he has better options at blind-side flanker and at number eight, leaving Brown to fight for the open-side berth.

The likes of David Denton and Johnnie Beattie were preferred in the six and eight roles during the autumn internationals, when scrum-half Greig Laidlaw deputised as captain.

However, Johnson insisted there is still room for Brown in his back row.

"We have some good six and eight athletes coming through," said the head coach as he

"We need to compete athletically against the bigger nations and we have guys coming through who we feel can do that.

"Therefore, I want to encourage the growth of those players.

"Kelly fits a different mould. He's done really well for Saracens at seven over the last five or six weeks, so moving down the path, that will be his spot."