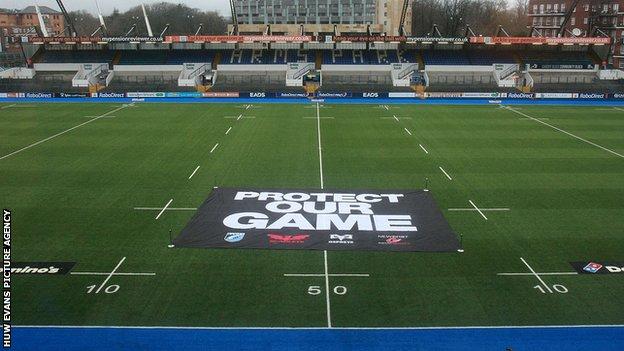 The four Welsh regions have held talks with the Welsh Rugby Union over a new deal to replace the existing participation agreement.

The Welsh regions refused to renew the existing agreement with the WRU by the governing body's 31 December deadline.

A new proposal from the WRU, called the Rugby Services Agreement, has now been presented to the regions who are considering it.

The WRU has yet to make a comment following the meeting.

Although Cardiff Blues, Newport Gwent Dragons, Ospreys and Scarlets - which are represented by Regional Rugby Wales - failed to meet the new year deadline imposed by the WRU, the current five-year participation agreement does not expire until June 2014.

That agreement sets out the relationship between the WRU and the regions and includes funding, player release for internationals and competitions.

The regions believe that renewing the existing participation agreement would leave them struggling financially.

That had raised the spectre of the regions - which currently play in the Pro12, the Heineken Cup and its second tier Amlin Challenge Cup - possibly signing up to proposed alternative cross-border competitions which the WRU has said it would not sanction.

The regions confirmed that they "remain committed to the implementation of the Rugby Champions Cup", the competition mooted to replace the Heineken and Amlin Cups.

It remains to be seen whether the new Rugby Services Agreement will address enough of the regions' concerns to end the dispute between the two sides.

The regions met the WRU in Swansea on Wednesday and further discussions are planned.

However, a statement from Regional Rugby Wales said it would be "requesting further details, clarity and confirmation on a number of points raised in the proposals to see if there is any common ground".

First Minister Carwyn Jones has said he is prepared to talk face to face with both sides in the dispute and added that fans wanted to see an end to the row.