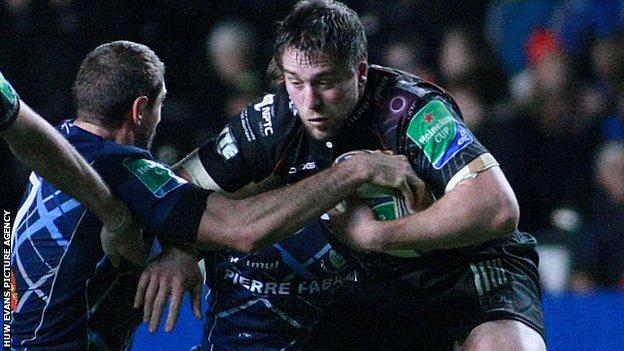 Bristol first-team coach Sean Holley has refused to be drawn on reports Wales forward Ryan Jones will be joining the English club next season.

Reports suggested Jones, 32, would quit the Ospreys in the summer to join the Championship club on a two-year deal.

"Unfortunately he's in contract so I can't confirm or deny whether the story is true," said Holley.

"I think he's a fantastic player, a great ambassador and he would be a tremendous acquisition for any club."

This is a unique situation. Some players, they still don't know where their futures lie

The former Ospreys head coach continued: "We've been talking to a lot of players - Welsh, English, Irish, Scottish - and Ryan is a big name.

"What I will say is I've got a lot of time for Ryan Jones."

The Ospreys forward has been included in Wales' 32-man squad for the Six Nations, which begins against Italy in Cardiff on 1 February.

Wales will begin the defence of their title against the backdrop of the dispute between the Welsh Rugby Union and the four regions.

Jones said the uncertainty over the Welsh regions' future should not overshadow Wales' bid to become the first country to win three successive Six Nations.

The WRU is considering offering to centrally contract six of the country's top stars including Wales captain Sam Warburton if they cannot agree deals to stay with their regions.

Holley, who joined Bristol as first-team coach in April 2013, believes players are still undecided over their futures because of uncertainty over domestic and European competitions next season.

"This is a unique situation. Some players, they still don't know where their futures lie," Holley told Radio Wales Sport.

"Look at these six players who have been offered supposedly central contracts.

"They've got a tough decision to make because they don't know which competitions their home club or union could be playing in."