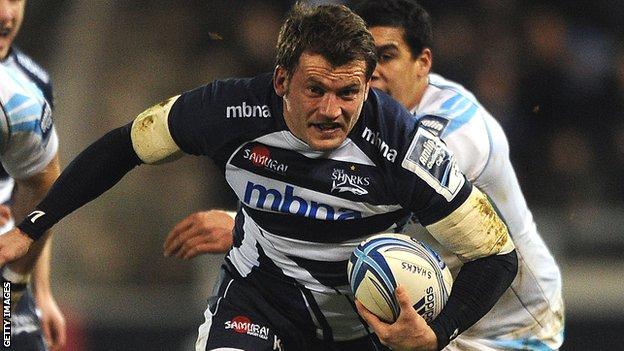 Ex-England international Mark Cueto has signed a new one-year contract with Sale, while fellow winger Tom Brady has agreed a two-year deal with the Sharks.

Cueto is the Premiership's all-time leading try scorer with 84, including six in 11 league outings this season.

The 34-year-old at the start of the campaign but will now play on until 2015.

Brady, 22, has crossed twice in seven league appearances, having from last term.

"Mark is enjoying a new lease of life with the club," director of rugby Steve Diamond told the club website.

"He continues to score tries and is a player the younger lads look up to and go to for advice.

"Tom is a local lad and playing the best rugby of his career now and I am sure he will represent the club for many years to come."

Cueto, who scored 20 tries in 55 games for England and also represented the British and Irish Lions against New Zealand in 2005, is Sale's longest-serving player after making his debut for the Greater Manchester club in 2001.

He added: "I am really enjoying my rugby at the club and am looking forward to adding to my try tally.

"'Dimes [Steve Diamond] has assembled a great squad of players and I want to play my part to help the club do well."