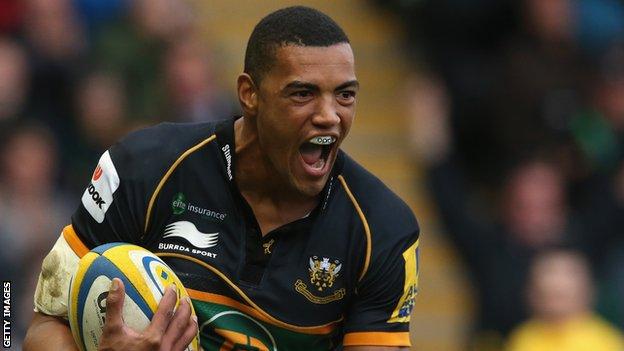 Northampton centre Luther Burrell has said he will look to prove to England boss Stuart Lancaster that he is worthy of a place at the Six Nations.

The 26-year-old is in for the tournament, which begins on 1 February.

"It hasn't sunk in yet," he told BBC Radio Northampton.

"I'm sure when I get to [England's training base] Penny Hill and show why I can put my hand up for a shirt, it will finally sink in."

Burrell, who has played rugby league for his hometown club Huddersfield, was a late injury cover call-up for England's summer tour of South America last year and was again in the party for the autumn internationals, but failed to make his Test debut.

Now in his second season with Saints, the back has been tipped for England honours after adding three tries from 12 Premiership games and five Heineken Cup appearances to his name in the 2013-14 campaign.

"There's obviously been a lot of talk in the press," he added. "I was included in the autumn internationals but ended up coming up short and not getting a chance.

"But still being on the radar was fantastic.

"This time I got the call and it's quite surreal really. To be included after the work you put in is fantastic."