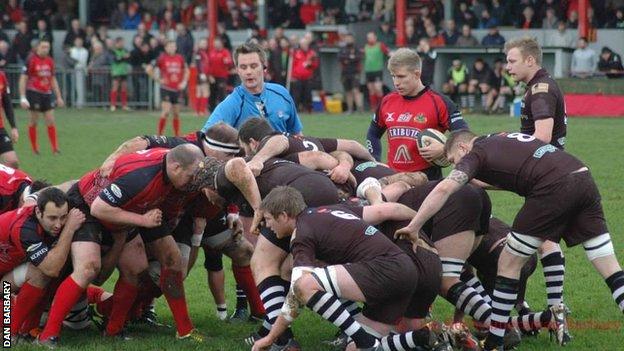 The Cornish All Blacks have won all eight home games so far.

"We have got a great fanbase and supporters who come week-in, week-out and that helps a huge amount

"The guys are doing a job for everybody and not just themselves and maybe that puts the opposition off a little bit," Rainford told BBC Radio Cornwall.

"We are probably the best-supported club in the league and whether the opposition struggle when they see the numbers of people we get, I don't know.

"We're very proud of our home record - we've always said if we can keep it going then it's something we can build on. The guys have done really well to take that through to the second half of the season."

Launceston's average attendance this season is about 600, and the club can attract in excess of 1,000 people through the gates for a local derby against Redruth.

Rainford's side face Ampthill & District at home on Saturday, a side they lost 56-11 to earlier in the season.

"We learned you cant take anything for granted," said Rainford.

"They've got some great ball-carriers and they're scoring plenty of tries - we know it's going to be a fast game and they like to throw the ball about. We have to put our A game out."

Ampthill are third in the league, but have lost their last two games, albeit against the two side above them in the table, Canterbury and Hartpury College.