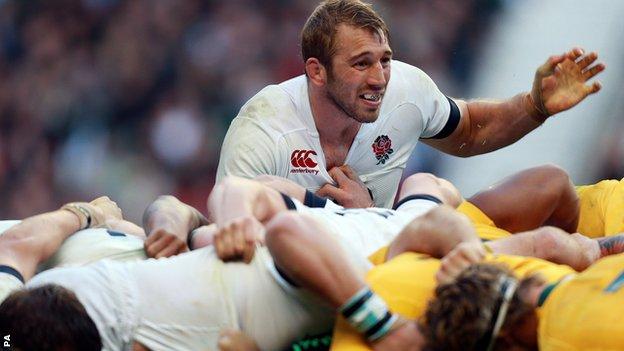 England have named Chris Robshaw as captain for the Six Nations.

The Harlequins flanker, 27, first led his country for the 2012 tournament, and has captained the side in 19 of their last 22 Tests.

"Chris is in the team on merit as a player but he has also shown himself to be an outstanding leader," said England head coach Stuart Lancaster.

Robshaw drew criticism for his captaincy in 2012 after he elected for his side to kick a penalty at goal when a late try would have secured victory over South Africa.

Despite the setback, the Quins skipper led England throughout their entire Six Nations campaign in 2013, but was rested for the summer tour of Argentina.

"To lead your country is a massive honour but I am fortunate to have a group of players and leaders who support me in that," said Robshaw, who led the side in last year's autumn internationals against Australia, Argentina and New Zealand.

"We want to kick on from the autumn internationals and we can't wait for the challenge ahead, starting with a tough away match against France."

England travel to Paris on 1 February, before facing Scotland at Murrayfield a week later.

Meanwhile, England Saxons - the country's development side - have included nine new faces in a 25-man squad.

Exeter Chiefs backs Dave Lewis, Henry Slade and Sam Hill have been called into the group, while Fiji-born Rokoduguni qualifies for selection courtesy of his English residence.

Rokoduguni, a lance corporal with the Royal Scots Dragoon Guards and a qualified tank driver and gunner, has served in Afghanistan and Iraq.

He scored a hat-trick of tries for the Army against the Royal Navy at Twickenham in 2012 before signing for Bath, where he has four tries in the Premiership this season.

"We've followed Semesa's progress since his days in the Army, he's excited about playing for England after qualifying by residence and his form and the feedback from the Bath coaches has been excellent this season," added Lancaster.

"The Saxons squad is a great opportunity for players to put a marker down and show they have the ability to go from club to country and still deliver the club form many of them have been showing.

"The opportunities ahead of them are clear with a major tour to New Zealand to come this summer before the Rugby World Cup next year."