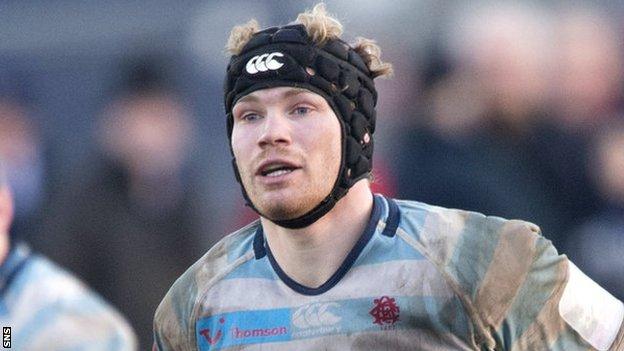 Bristol have signed Scotland flanker Ross Rennie and hooker Stuart McInally on loan from Edinburgh until the end of the season.

Rennie, 27, who has 20 senior caps, was named in Scott Johnson's 36-man squad for the Six Nations.

McInally, 23, has represented Scotland in sevens and at junior levels.

"Ross has shown repeatedly at the highest level that he can compete with the best openside flankers in the UK," Bristol boss Andy Robinson said.

"I coached Ross at Edinburgh and he's an extremely talented player with a superb work-rate and a drive to achieve."

It has been a challenging couple of years for Ross, who recently returned from long-term knee and shoulder injuries

While Rennie, who featured in the 2011 World Cup, joins his Scotland team-mates in camp next week, McInally will link-up for the first time with the English Championship club on Monday.

The former back-rower, who made the positional change to hooker in the summer, has been an unused matchday replacement for the full national team.

McInally has made 58 appearances for Edinburgh and represented Scotland at all age groups between Under-17 and Under-20 levels before going on to play for Scotland A and in the World Sevens Series.

"Hooker is a relatively new position for Stuart, but he's adapted to the role quickly - that's a sign of his versatility and professionalism," former Scotland and England boss Robinson told the club website.

Edinburgh head coach Alan Solomons said: "We have agreed, on mutual grounds, to accept the loan.

"Stuart's loan spell will allow him to continue his development in a new position in a fiercely competitive and often forward-dominated league.

"It has been a challenging couple of years for Ross, who recently returned from long-term knee and shoulder injuries. A fresh start will re-energise him."

Rennie, who joined the Pro12 club after attending Edinburgh Academy and has recently been guesting with Edinburgh Academicals along with McInally, is looking forward to helping Bristol's Championship campaign.

"Edinburgh's my home town and I love the club," he said. "It's been my life for the last 10 years, but I think the time is right to have a new challenge.

"I know the direction Bristol want to go and the plans that Andy has, so it's an exciting time to join the club.

"There's an important few months coming up and I hope that I can contribute to the cause."

McInally made his positional switch last summer and hopes the move to England's second tier will help his development at hooker.

"I've got a strong ambition to play professional rugby for Edinburgh and international rugby for Scotland, so the opportunity to get regular game time at Bristol was something I jumped at," he said.

"I'm looking forward to getting started and helping the club achieve a top-four finish in the Championship."