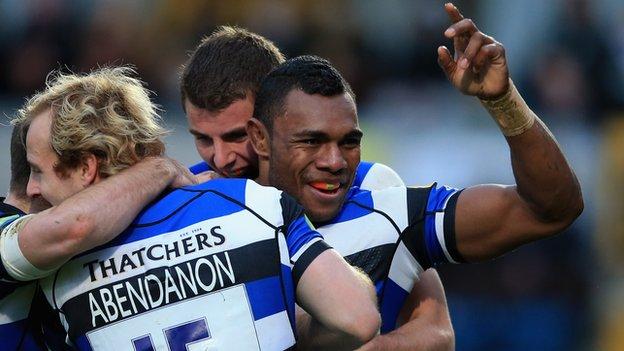 The Fiji-born lance corporal with the Royal Scots Dragoon Guards, has been added to Stuart Lancaster's Saxons squad to face Ireland Wolfhounds.

Rokoduguni, 26, marked his return from a knee injury with two tries in Bath's 54-13 Amlin Challenge cup win against Bordeaux-Begles on Thursday.

"He is a massive find for us," Louw told BBC Points West.

"Hopefully he will get a run for England soon."

Rokoduguni, a qualified tank driver and gunner who has served in Afghanistan and Iraq, signed for the West Country club in October 2012 having impressed while on trial at the Rec.

He scored a hat-trick of tries for the Army against the Royal Navy at Twickenham in 2012 before joining Bath, where he has four tries in the Premiership this season.

The winger was sidelined for almost eight weeks with a knee injury after scoring two tries against London Wasps in November.

"He's come straight back into the team at the top of his game," he said.

"That shows what the medical department and strength and conditioning team can do with the guy, bringing him back bigger and stronger than he was."