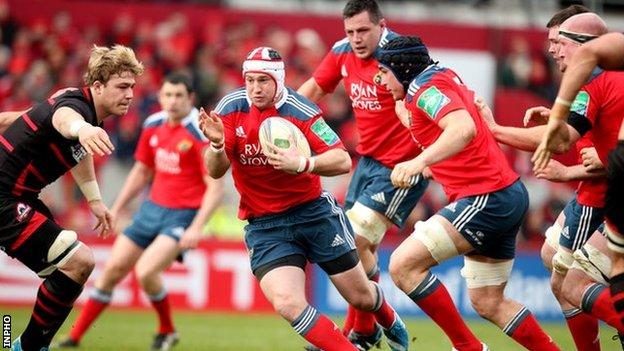 Munster clinched a home Heineken Cup quarter-final against Toulouse as they scored six tries in a 38-6 bonus-point win over Edinburgh at Thomond Park.

Edinburgh began the game strongly and dominated the early stages but Laidlaw was off target with his first shot at the posts after three minutes.

The visiting fly-half made amends with a successful penalty attempt in the seventh minute, but Munster scored their first try through Coughlan just a minute later.

Paul O'Connell rose highest to collect Ian Keatley's restart kick, Murphy played his part, and Coughlan went on a piercing run through the Edinburgh defence before touching down for the five points.

Keatley's conversion kick rebounded off the upright, but Munster retained the upper hand as their dominance in the scrum forced the Scottish side into a resolute defensive effort.

Murphy added the second try on 22 minutes, collecting a Murray pass following a scrum, then stepping inside Dave Denton and planting the ball under the posts.

Keatley added the extras on this occasion to give his side a nine-point lead.

Soon after, Keith Earls was forced off with a leg injury, his Ireland international team-mate Zebo coming off the bench as his replacement.

Laidlaw reduced his team's deficit to six points after Munster were penalised for not releasing and was then prominent as Edinburgh laid siege to their opponents' line.

O'Connell and Zebo combined to hold up Laidlaw just short of the line and several phases of Edinburgh pressure eventually ended with a knock-on.

The first half ended with Edinburgh flanker Cornell du Preez sin-binned for reckless use of the head against O'Connell during a maul.

Try number three materialised for the hosts four minutes after the interval, Murray diving over after Dave Kilcoyne had been tackled just short of the line following flanker Tommy O'Donnell's initial burst.

The try that secured Rob Penney's side a home quarter-final came on 57 minutes, skipper O'Mahony barging his way over the line after Murray provided the pass.

Keatley knocked the ball between the posts for his third conversion to make the scoreline 26-6.

Zebo got in on the act when he had the simple job of touching down in the corner for the fifth try, Keatley unable to add the additional two points on this occasion.

Replacement Geoff Cross was the second Edinburgh player to receive a yellow card, in the 74th minute, after he became the latest in a series of players to be penalised for infringing at the ruck.

Full-back Jones completed the rout when he added the finishing touch to a fine flowing move along the back division, which began with Munster securing possession from a line-out, while Keatley landed the conversion to rub further salt into the wound.