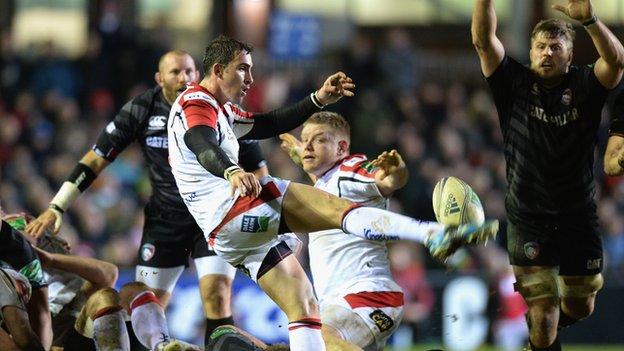 Man of the match Ruan Pienaar lauded a "massive team effort" as Ulster secured a home Heineken Cup quarter-final against Saracens with an epic 22-19 win over Leicester at Welford Road.

Pienaar scored all Ulster's points but the South African said that the display of his team's pack had been vital.

"And we controlled the game pretty well with our kicking game."

The Springboks star, 29, said that Ulster's defence had been a "massive focus" for the team after last weekend's less than impressive win over Montpellier.

"We weren't too great against Montpellier and we had to make a massive step up. But I have to say again that our forwards were outstanding. They made a couple of massive hits."

Asked about his try, which helped Ulster claw back a 10-point deficit to level the game at 19-19, Pienaar said:"I always try to put pressure on the opposition kickers but you don't always get to them.

"Thankfully, I got to that one and the ball managed to slow down before going over the dead ball line."

Pienaar was strongly linked with a move to French club Toulon earlier this season before agreeing a new three-year deal with the Irish province.

Ulster hooker Rory Best said that the team's response to going 10 points down early in the second half "showed the massive belief in this group of players".

"It's a testament to the character that we have that we came back and won," added the Ireland star.

"We were skilfully aided by Ruan with his kicking performance as well as the charge down.

"If you are going to do things in a Heineken Cup, you need a strong set-piece."

Best added that the Ulster team had been "determined" to complete Pool 5 with a perfect record of six straight wins.

"We talked this week about trying to make a bit of history and win six from six and we wanted that home quarter-final.

"We have put a bit of pressure on the builders (at Ravenhill) to make sure that we are ready for that game.

"But it will just another step along the way for us.

"We need to make sure that it's not just an occasion but a performance and a win for us as well."