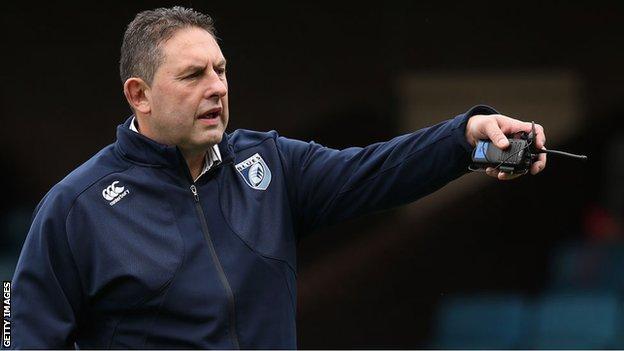 Coach Phil Davies says he is satisfied with the Cardiff Blues' performances in this season's Heineken Cup.

The Blues suffered a 19-13 defeat to Exeter Chiefs in their final Pool 2 game at the Arms Park, but can still qualify for the Amlin Challenge Cup quarter-finals on Sunday.

Davies and his side need results to go their way to qualify for the knockout stages for European rugby's second tier tournament.

"We have come a long way," said Davies.

It's satisfactory because we were better than we were last year

"The team out there resembled the one we had out in Montpellier last year and to do what we have done...I am really proud of them.

"We are gaining experience and getting better. The players deserve credit for that."

The Blues are out of the Heineken Cup but did beat reigning champions Toulon 19-15 at the Arms Park back in October.

The Welsh region needed a three-try win over the Chiefs to secure a spot in the last eight of the Amlin Challenge Cup but suffered their second defeat to the English side in Pool 2.

Davies' side only won one game in last season's tournament, but he was satisfied the Blues have made progress.

"It's satisfactory because we were better than we were last year," said Davies.

"This year we have had three wins, the victory over the champions here stands out for us.

"The back-to-back wins over Glasgow were terrific, but we were found wanting last week against Toulon.

"We are showing we can perform at the highest level, we just need a bit more consistency."

But a young and inexperienced Blues side suffered two defeats to a well drilled and organised Exeter outfit.

The English side quickly built a 13-0 lead before Wales winger Alex Cuthbert crossed for the Blues' solitary try to drag his side back into the contest.

It was not enough to record the victory the Blues needed, but it did mean Davies' side recorded a vital bonus point to put themselves in the mix for an Amlin Challenge Cup quarter-final place.