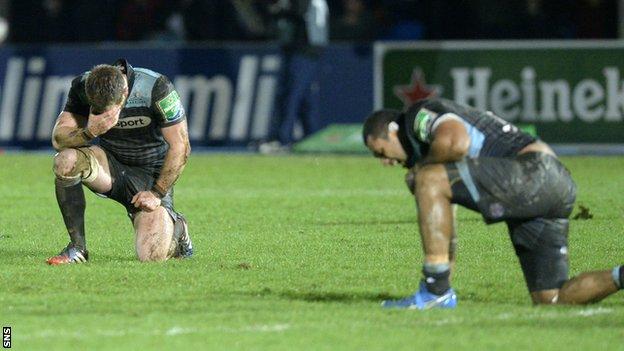 Coach Gregor Townsend was frustrated not to take something from Toulon but takes heart from Glasgow's display against the Heineken Cup champions.

The star-studded visitors survived a late period of pressure to leave Scotstoun with a 15-8 victory.

"We played some of our best rugby of the season," said Townsend. "I thought defensively we were outstanding and we showed real attacking intent.

"I don't think there was much difference between the sides."

Toulon captain Jonny Wilkinson kicked five penalties to give the visitors a commanding lead on a cold, wet afternoon.

However, an opportunist try from home skipper Chris Fusaro set up a tense finale, with Glasgow camped near the opposition try-line in the closing minutes to no avail.

"We created a lot but didn't get our rewards," added Townsend.

"Some of that was down to their great defence and some was down to us not executing close to the try-line.

"But I was really proud of the players, I thought they stuck in really well.

"Actually, they did much more than stick in, they played some great rugby and it's a shame we didn't get that try at the end.

"That would probably have forced a draw and that's what the guys deserved.

"We were up against a top quality side with huge set-piece power on a wet pitch and we fronted up really well.

"It's disappointing not to take our opportunities but we'll learn from that.

"We moved Toulon around in a close first half and showed character to come back in the last 20 minutes and that was a huge effort."

Glasgow finish bottom of Pool 2 with 11 points; their only wins coming home and away against Exeter.

"We lost our chance of qualifying in the two games against Cardiff," added Townsend.

"I thought we played really well in one-and-a-half games against Toulon and in two games against Exeter - and those two are quality sides.

"It's one more win than last year but we all believe we are capable of more than that, so it's frustrating."