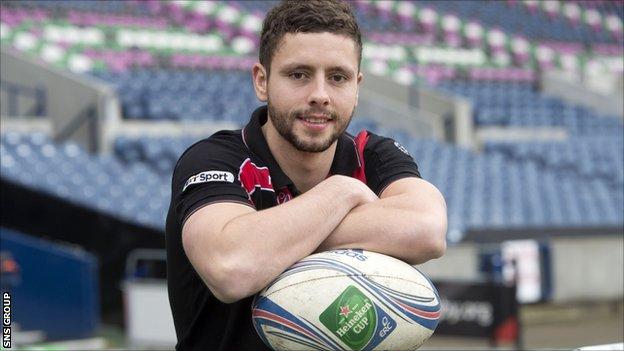 Premiership side London Irish have signed Edinburgh scrum-half Sean Kennedy on loan for a month.

The 22-year-old signed a contract extension with the Pro12 club last week, after recovering from a knee injury picked up in the autumn.

Edinburgh head coach Alan Solomons said: "This is an excellent opportunity for Sean to get back up to speed with some game time at an elite level."

Irish travel to Wasps in the LV= Cup on Saturday.

He will provide injury cover for Patrick Phibbs and Darren Allinson, who is out for the next five weeks with a cheekbone injury.

Exiles director of rugby Brian Smith said: "Sean comes in to provide cover for both of them.

"Tomas O'Leary has taken on the bulk of the responsibility so far and Ed Hoadley has done a good job in the last few weeks.

"I have liked what I have seen from Sean and I'm sure he will come in and do a good job."