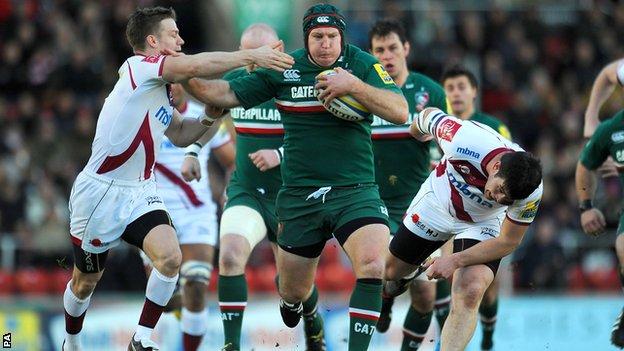 Leicester and England number eight Thomas Waldrom has signed a three-year deal to join Exeter Chiefs from the start of next season.

Waldrom has been with the Tigers for four years since arriving from New Zealand and has won five caps, having qualified via an English grandmother.

"I'm excited by the move because it's a fresh challenge for me," said Waldrom.

As we look to move forward as a club, I think it's vital that we have players like him coming into the squad

"I've had four fantastic years at Leicester and experienced so many high points with them. A lot of what I have achieved in the game has come from my time playing there, so I owe them and the supporters an awful lot.

"Also, I've made a lot of good mates who I will no doubt stay in touch with, but when I spoke to [Exeter Chiefs head coach] Rob Baxter I liked what he had to say about the club, the direction it was heading and the plans for the future."

Waldrom, who has also played for New Zealand sides Hurricanes and Crusaders, has made 105 appearances for the Tigers, scoring 21 tries, and earned a Premiership title and an LV= Cup winner's medal.

He was also named the Rugby Players' Association Player of the Year in 2011, but Tigers director of rugby Richard Cockerill told BBC Radio Leicester there was sometimes a "natural end" to an individual's time with a club.

"He's decided that he wants to start every week and Exeter are a good club, and we wish him well for when he leaves but there's still three or four months to go."

Exeter boss Baxter said the signing of a Test-quality player was indicative of the club's progress.

"As we look to move forward as a club, I think it's vital that we have players like him coming into the squad," he added.

"Although he has been around for what seems a very long time, he's still only 30 and we feel his best years are probably still to come."