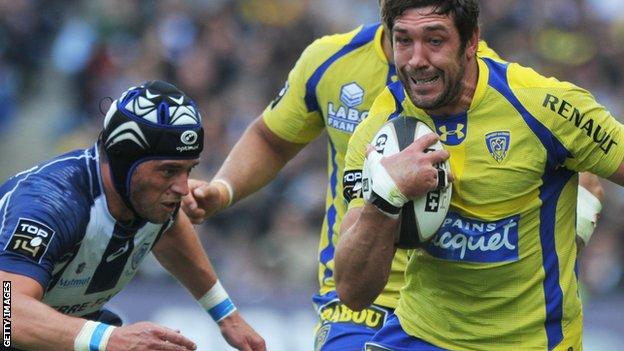 The 37-year-old, who has 77 caps for Scotland, will join in June from French side Clermont Auvergne and fill the gap left by James Gaskell's departure.

Although born in Australia, 6ft 7ins Hines emigrated to Europe in 1999, when he joined Edinburgh.

"Nathan is a world-class player and will fit in well," said Sale director of rugby Steve Diamond. "He has vast experience at the highest level."

Hines, who began his career in rugby league, is currently in his second spell in French rugby, having left Edinburgh after six years to join Perpignan in 2005.

From there, he moved to Ireland and was a member of Leinster's 2010-11 Heineken Cup-winning side, before he returned to France with Clermont.

"Nathan is a regular starter at Clermont," Diamond added. "Last weekend he was magnificent in helping his team beat Racing Paris.

"The forwards at Sale Sharks have played well this season and adding Nathan to the group will be a big boost to us."

Hines retired from international rugby in 2011 after taking part in his third World Cup.