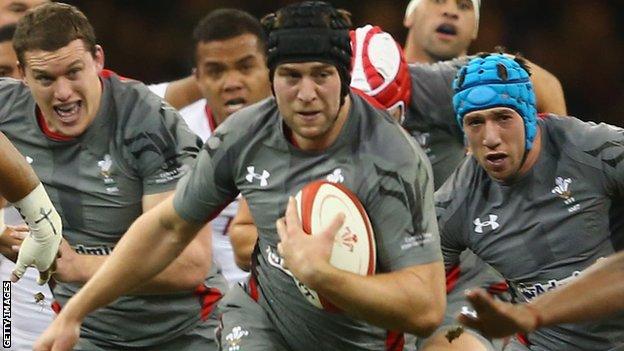 Former Wales captain Ryan Jones has been ruled out of this year's Six Nations because of a hamstring injury.

The Ospreys back-rower, 32, led Wales in three of their Six Nations matches last season as they retained the title.

Jones, who was injured in Friday's 36-3 Heineken Cup defeat by Leinster, has been replaced by club-mate James King.

Wales also have concerns over lock Ian Evans, who faces a disciplinary hearing after being sent off in the game against Leinster for alleged stamping.

British and Irish Lions hooker Richard Hibbard is also a doubt after going off injured during Friday's match in Dublin.

Warren Gatland, back in charge of Wales after taking a break to coach the British and Irish Lions to a series win in Australia, named his 32-man Wales squad on 14 January.

Included in the squad was prop Gethin Jenkins, who has a knee injury, and captain Sam Warburton, who is recovering from a shoulder injury,

Wales Online reported on Monday that flanker Warburton would be fit to play the first match against Italy on 1 February .