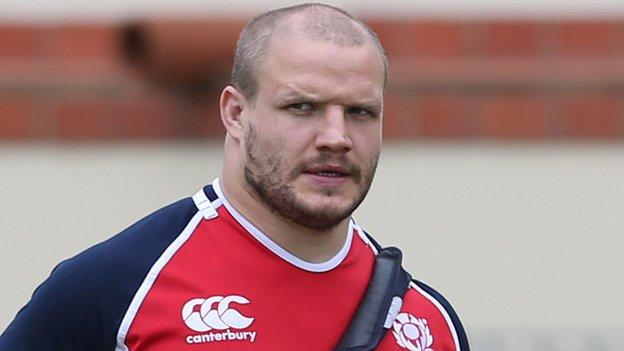 Worcester Warriors' nightmare season has taken a turn for the worse after losing Scotland forward Euan Murray with a freak hand injury.

The 33-year-old tighthead prop has this week seen a specialist after reportedly injuring his thumb chopping wood.

So far this season, Dean Ryan's Worcester have suffered a burned-out coach on the motorway on the way to a game in Wales, been badly delayed by fog en route to a match in France, held up by a broken crossbar at Gloucester. suffered injuries to centre Andy Symons (broken collar bone), hooker Gus Creevy, scrum-half Jonny Arr, Paul Warwick and now Euan Murray - and lost all 12 Premiership games. They are currently in Portugal, escaping the cold snap for a week of warm weather training.

A club statement confirmed that Murray "sustained a thumb injury during a team-building exercise at Sixways".

Murray has not played since picking up a knee injury with Scotland during the autumn international series.

He was not expected to feature in this year's Six Nations, but his mishap is likely to have ended his season.

"Warriors are working with the specialist and will comment further when the full extent of the injury is known" added the club statement.

The former Northampton player, initially signed from Newcastle Falcons in October 2012 after a short-term loan deal with French side Agen, is the latest in a string of Worcester injury victims.

The Warriors are bottom of the Premiership, having lost all their 12 matches and are marooned 11 points adrift at the bottom, looking certainties for relegation.

Their overall run of 17 straight league defeats, stretching back to 1 March, is now the joint second worst in Premiership history. Only Rotherham, who went down without winning a single league match in 2004, have fared worse.

However,they did at least have the tonic of a first win at Sixways this season when they beat Oyonnax 20-13 in the Amlin Challenge Cup on Saturday.