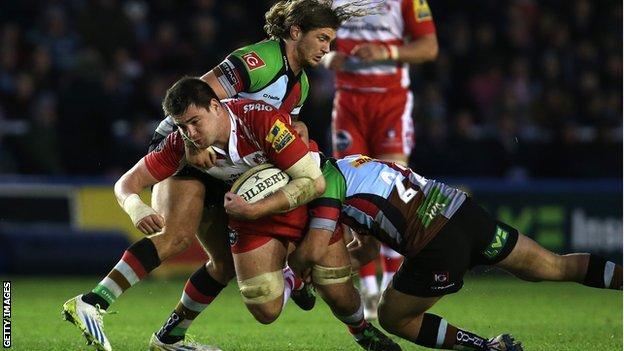 Gloucester's Elliott Stooke has been added to the England Saxons squad for their match with Ireland Wolfhounds.

Stooke made his first start for Gloucester in September and helped England Under-20s to their first Junior World Championship title last summer.

Miller comes in for Leicester full-back Mathew Tait, who has suffered a back injury, while Hopper replaces Bath's Jonathan Joseph and Mercey takes over from Harlequins' Will Collier.

The Saxons meet Ireland Wolfhound at Kingsholm on Saturday before facing Scotland A on 31 January.

Speaking about his call-up, Stooke told the Gloucester website: "I'm buzzing, I got the call out of the blue, but it'll be a great honour to be involved for my country.

"It's also at the home of my club which makes it extra special. I'm looking forward to joining up with a talented, exciting squad and trying to contribute where I can."