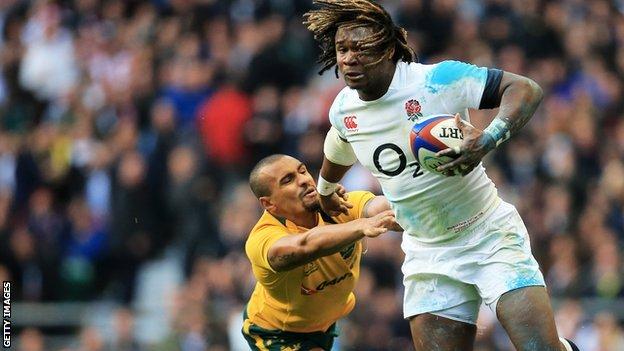 The 21-year-old suffered a ruptured tendon in his hip during a game against Leicester on 23 November, initially ruling him out for 12 to 14 weeks.

Smith says the winger could return against the Tigers on 23 February.

"We've been across Marland's injury from day one," the Exiles director of rugby told BBC Radio Berkshire.

"We had kind of earmarked the Leicester Tigers game as a potential comeback for Marland to play for us.

"If he does well in that game and possibly the game after in the Premiership he may put himself in contention for the backend of the Six Nations, so the last one or two games."

Yarde started England's autumn international against Australia but missed the matches with Argentina and New Zealand, also with a hip problem.

He has two caps for his country, having made his debut against Argentina during the summer tour, but following surgery in December was a major doubt for England's 2014 campaign.

"He still has quite a bit of rehab to get through and hopefully there will be no setbacks," added Smith.

"If everything runs smoothly then there is a chance he'll play for England - but a bit more importantly for our supporters he'll be turning out for London Irish."