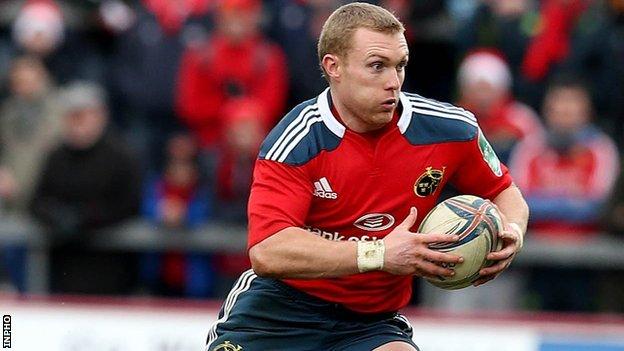 Ireland and Munster have received a further boost with the news that Keith Earls has signed a new two-year contract with the IRFU.

The deal means Earls will remain at Munster until at least June 2016.

It was announced on Monday that Irish skipper Paul O'Connell would also continue to play for the province, while back row Sean O'Brien recently committed his future to Leinster.

The trio, along with Jamie Heaslip, were targets for French Top 14 clubs.

Heaslip's future remains in the balance, but it is thought likely that he will follow suit and continue to play for Leinster and Ireland.

Earls made his senior debut for Munster against the Ospreys in April 2007, and has made 91 appearances for the Irish province, scoring 26 tries.

The 26-year-old first played for Ireland in a 55-0 win over Canada at Thomond Park in November 2008 and has now accumulated 39 caps, scoring 12 tries.

He toured South Africa with the Lions in 2009 and his most recent appearance for Ireland came in the final game of last year's Six Nations series, against Italy.

The versatile back could be a doubt for Ireland's Six Nations campaign after having to leave the field with a knee injury during Munster's Heineken Cup win over Edinburgh on Sunday.

"I am delighted to sign a new IRFU contract and to continue representing my province," said Earls.

"This Munster team has shown it has what it takes to compete with the best in Europe and I look forward to playing my role in bringing further success to both Munster and Ireland."

"Keith is an exciting player whose speed and acceleration can cause havoc for opposition defences. As a senior member of the squad he will play a huge role in the future success of the province," enthused Munster coach Rob Penney.