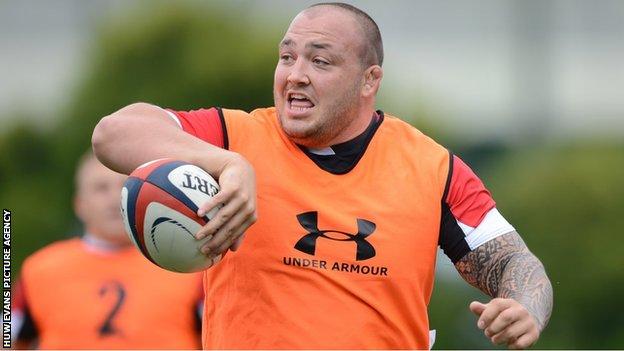 The 27-year-old tight-head, who has won 15 caps for Wales, will arrive at Cardiff Arms Park in the summer.

Exeter signed Mitchell from Blues' Welsh rivals the Ospreys in March 2011 and he signed an extension the following year.

But Mitchell has struggled with long-term chest and shoulder injuries over the past two seasons.

"It's not quite worked out how I would have wanted because of the injuries... in an ideal world I'd love to have played more, simply because the Chiefs are a great club," Mitchell said.

"At the same time I've been offered a great opportunity with the Blues and it's one that I am looking forward to.

"For me it's a chance to go home and try and kick-start my career again. One of my aims is obviously to try and get back into the Wales squad, but the boys who have come in have done well so it's going to be tough.

"I know I will have to work hard to try and do that, but I am willing to put myself through the pain barrier to get back in."

However, Mitchell is expected to return from injury against former side Ospreys in the LV= Cup this weekend.

Blues director of rugby Phil Davies said: "Craig is an experienced player and he's clearly learnt a lot during his time with Exeter. He's delighted about this opportunity with Blues and we are very excited that a player of his quality and calibre will join us.

"Craig is known for being an exceptional set-piece player, but his work rate and impact outside the scrum is also very good. He complements the props we have at Blues and the front row will be much stronger for his signing.

"With a World Cup just around the corner, we are delighted that an international quality player of his experience is coming back to Wales determined to make an impression for us.

"I have spoken to Craig at length about what we expect from him and he's coming here keen to play a big part in the future of the Blues."

The capture of Mitchell for next season follows the news that Samoa centre Isaia Tuifua has for the rest of the season.