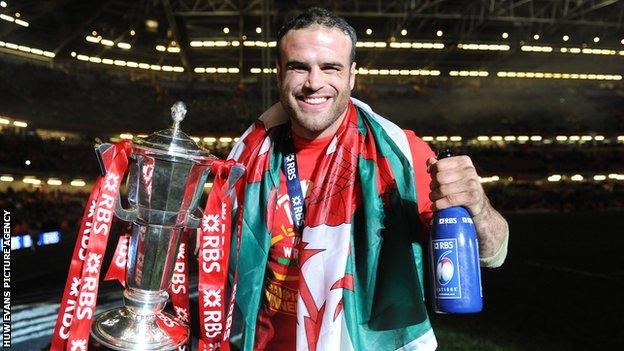 The Welsh Rugby Union is in dispute with its four regional teams over funding, proposed new competitions and the exodus of players to richer clubs in France and England.

Roberts, who left Cardiff Blues to join French side Racing Metro this season, is positive things can be sorted out.

"I just think it will rally everyone," said Roberts.

Some of Wales' leading Welsh-based players are out of contract at the end of the season.

Six of them, including Wales and British and Irish Lions captain Sam Warburton, are reported to have been offered central contracts by the WRU.

Roberts says he has sympathy for his team-mates.

"Being out and looking back in, I do feel for a couple of the Welsh boys who are maybe out of contract this year," said Roberts.

"You feel for them and the fans.

"As negative as things are at the moment I can see, maybe six months down the line, Welsh rugby becoming stronger because of this.

"Obviously everyone is frustrated, players and fans alike. But hopefully come the end of everything which has happened off the field, it will make everyone stronger.

"We've seen the support the regions have had over the past few weeks, the Arms Park for example was a sell-out at the weekend, the fans are turning out.

"Hopefully these decisions will be made but as players it's all above our heads."

Roberts, who has recently returned from injury, has to negotiate another match for his club against Toulouse in the French Top 14 on Saturday, before he returns to the Wales training camp.

The 27-year-old says being in the Wales set-up for the past few days will help him regain his sharpness ahead of the Six Nations.

"Being in this environment, playing on the weekend, I'll get back up to speed pretty quickly," Roberts said.

"I always have done after injuries.

"I'm feeling good, feeling fresh, feeling ready to go and I suppose the challenge for me now is to try and stay injury free."

Roberts says the off the field events are not affecting the players and that the squad is fully focused on trying to help Wales become the first country to win the Six Nations three times in a row.

"It's the chance to create history," said Roberts.

"It's a different psychology now. We go in as favourites. It's as simple as that.

"We have to shoulder that together and train well, train like champions and expect to play like it as well."