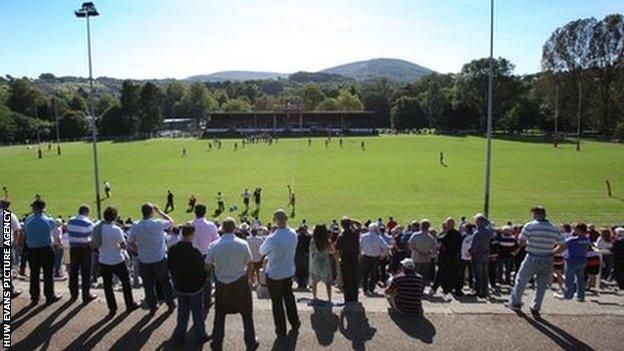 Club rugby in Wales cannot survive in its current form unless urgent action is taken according to Pontypool RFC's commercial director Ben Jeffreys.

Jeffreys claims the clubs have been left to "languish" by the Welsh Rugby Union and the four regional sides.

"It's got five to 10 years in its current form," Jeffreys told Radio Wales Sport.

He said WRU chief executive Roger Lewis has accepted an invitation to watch a match to see the challenges clubs face.

"When the older demographic is long gone, there won't be much of a club game to have around I don't think," Jeffreys added.

"There can be no hiding from the mess that the club game is in and people at the top of the WRU and the regions have to take responsibility for it, otherwise there probably will be a vote of no confidence in the board of the WRU if clubs are willing to speak up and act."

The WRU and Regional Rugby Wales, the body that represents the regions, have been asked for a response to Jeffreys' concerns but have so far failed to comment.

However, the WRU's financial records show that since 2008 it has invested almost £20m in its member clubs and grassroots rugby.

Swalec Championship side Pontypool, which during that period has also played in the top semi-pro Principality Premiership division, received a total of £333,302 since 2008.

Welsh rugby's elite professional tier was controversially reduced from nine to five teams for the launch of regional rugby in 2003.

One year later one of those teams, Celtic Warriors - a merger of Bridgend and Pontypridd rugby clubs - closed down amid more controversy.

Club sides such as Pontypool, Bridgend and Pontypridd continued as semi-professional teams playing in the Welsh Premier and acting as feeder clubs to the regions.

Jeffreys feels the club game has deteriorated in Wales and its condition has been ignored by the governing body and the regions.

"If you just do a simple exercise on Twitter of following every rugby club that has a Twitter account you're looking at 25-30,000 people," said Mr Jeffreys.

"There's certainly an argument that that's a massive segment of the Welsh rugby market that's being ignored."

The WRU and the Welsh regions are currently locked in a bitter row over funding, the exodus of Welsh players and a proposed Anglo-Welsh league.

On Tuesday regional rugby bosses met MPs in Westminster to discuss the situation.

Jeffreys feels the state of the club game should also be on the agenda as a matter of urgency.

"I feel like we've been largely ignored by the regions and I think they are starting to hold their hands up to that because they've had no other choice in the spectrum of this debate," said Jeffreys.

"In fairness to the Blues in particular and the Dragons, in relation to Pontypool, we've had some very good discussions with them lately and I'm confident that if we can get through this then it will be better for the whole game in the long run."