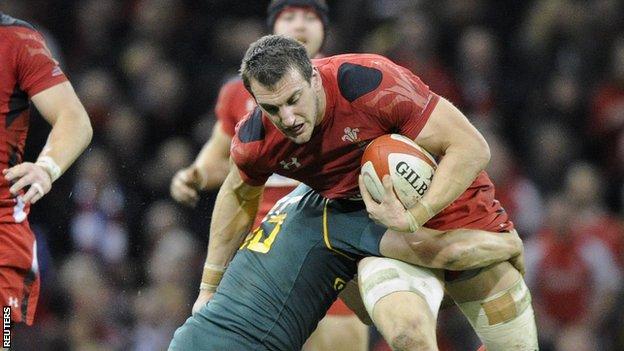 Wales captain Sam Warburton expects to be available for the Six Nations opener against Italy in Cardiff on 1 February.

The 25-year-old flanker has been out since the end of November with shoulder damage but is set to return.

"I think I'll be available for selection. I need to have a chat with [coach] Warren Gatland and the medics early next week to decide what's the best thing to do," Warburton said.

"We have a chance to win three Six Nations in a row and create history."

Warburton's lack of game time while recovering from his injury means he may play a match for his regional team Cardiff Blues before taking part in the Six Nations.

and the player says he would respect the call if Wales decide he is not fit enough.

Were that to happen Warburton admitted he could turn out in Blues' LV Cup home clash against Harlequins on 31 January.

"I'm doing a lot of rehab work, it's feeling good but we just have to wait," Warburton added.

"When I first saw the specialist he said the end of January would be most realistic.

"It's similar to what I went through 18 months ago after the 2012 Six Nations.

"Contact is the first hurdle I've got to get over. I've done it a few times now, returned quickly after injury.

"The fitness work we do with the Wales squad is great stuff, and they would make sure I wouldn't play if I wasn't fit."

The return to fitness of their skipper would give Wales a boost as they seek their third successive Six Nations title, a feat never accomplished by any side in the tournament's history.

"This is my fifth championship now and I love playing in them."

Wales will be who led Wales in Warburton's injury absence during part of last year's campaign, because of injury.

They will also be without Lions centre Jonathan Davies for most of the tournament because of a shoulder injury, while prop Gethin Jenkins remains an injury doubt

After facing Italy in the Millennium Stadium, Wales travel to Ireland the following weekend.

Gatland's men then face France at the Millennium Stadium on 21 February in a Friday night match, before rounding off their campaign in March away to England and then against Scotland in Cardiff.