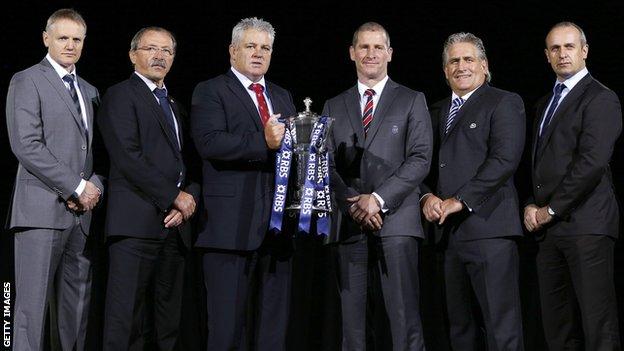 The Six Nations Championship is "up for grabs" and Scotland can "compete against anyone," according to interim head coach Scott Johnson.

"There are parts of our game, when you think 'that's just brilliant'; that can put us on any level against anyone," he told BBC Scotland.

"We've got big mobile forwards and we've got a back three that can score from the length of the pitch.

"Those are pretty good starting points in modern rugby."

Scotland kick off their campaign with a trip to Dublin on 2 February, with England and France coming to Murrayfield.

If we are in the game at 60 minutes, scoreboard pressure will favour us...

"We're up against some pretty formidable opposition and we only have two games at home," added Johnson, who will step into a director of rugby role when Vern Cotter takes over as head coach in the summer.

"But we won't run away from that; we've picked a squad to compete."

Scotland finished third last year, with two wins - against Italy and Ireland - and Johnson was reluctant to set targets this time round.

Instead, he again stressed the importance of building a base of Test experience ahead of the 2015 World Cup.

"I've been pretty clear with the steps we are trying to take, we are doing it systematically," added the Australian.

"We want to go to the World Cup in a competitive state and make sure we have the right mileage on the clock for our younger players.

"We got greater depth in the last 12 months, with new caps. That evolution hasn't ceased, it's just that now we are in a tournament.

"We are growing as a squad and our focus is where it needs to be right now but we haven't lost sight of the fact there's another tournament in 20 months' time."

Scotland beat Japan in November but that was followed by Murrayfield defeats by South Africa and Australia.

"There were periods in our autumn games when we competed against the best in the world; we've got to do that more consistently," said Johnson.

"Some of the tries we scored were first class.

"Success, for me, has always been how many of the games we're are actually in - in the key moments.

"If we are in the game at 60 minutes, scoreboard pressure will favour us because the opposition will be going in very confident against Scotland.

"If we can be there or thereabouts, the door will open for this team."