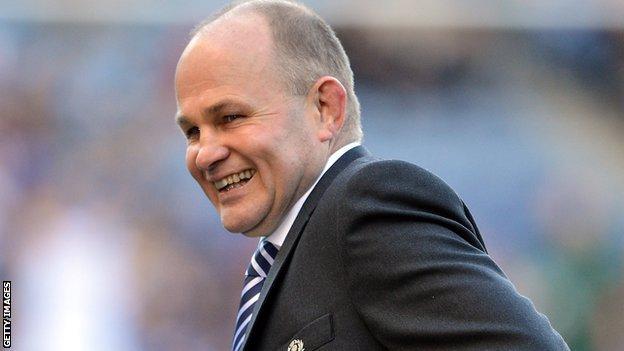 Bristol director of rugby Andy Robinson has insisted he is only interested in signing players who will be "the right fit" for the club.

The arrival of Ross Rennie and Stuart McInally on loan last week means Robinson now has a 50-strong squad.

Dwayne Peel and Anthony Perenise have also been confirmed as summer arrivals.

"People are looking at Bristol and saying 'they're going to spend this' when that isn't going to be the case," Robinson told BBC Radio Bristol.

Just because I have an interest in players, it doesn't mean we're trying to sign every single player

"Just because I have an interest in players, it doesn't mean we're trying to sign every single player.

"But if it's the right player and the right fit for Bristol, then I will say I want to sign that player."

During Robinson's 10 months in charge at the Memorial Stadium, he has overhauled the squad in a bid to get the club back into the Premiership.

They are currently occupying the final play-off place in the Championship - behind Leeds, London Welsh and Rotherham.

Former England and Scotland coach Robinson went on to admit he may have to offload some players who do not fit into his plans.

"I think for any player, you've got to show him how he fits into the squad and the games he's going to get.

"There's no point in a player being here if they're not going to play. If I was in that situation, and not being given game-time, why would I want to stay somewhere?

"If you're not going to get the game-time, it's right that players look for opportunities elsewhere.

"That's the conversation I'm having with players - around 'what is right for you moving forward?'