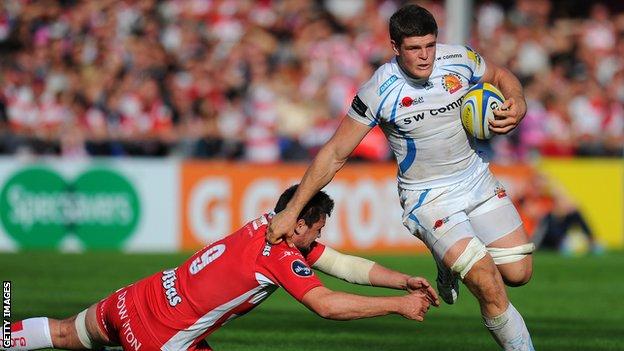 Ewers, 23, has enjoyed a breakthrough season, forcing his way into the England Saxons squad and establishing himself in the Exeter back row.

"We hope that over the next two years not only do we see him develop here but also on the international stage."

With Ewers' current deal running out at the end of the season and players free to talk to other clubs from 1 January, the Zimbabwe-born forward had been linked with a possible move away from Sandy Park.

"I know it must seem like it was tricky because I've been getting asked questions about Dave re-signing for quite a long time," added Baxter.

"We agreed everything with Dave quite a long time ago but it's just been a bit of delay in a couple of contract details. There's not been any arguments or problems, it's just been getting everyone together in the same room."

The speculation over Ewers' future gathered pace when Exeter announced the arrival of number eight Thomas Waldrom on Monday, but Baxter said there was no question of the Leicester and England forward being brought in as cover for anyone.

"Clubs that are going to compete at the top end of the table have to put strong squads together," said Baxter.

"You have to remember that our back row players - including Thomas Waldrom - don't just play one position. We're building a really strong back five of the scrum here and that's what its about.

"I think all these guys will complement each other and the big thing about Thomas is that he will bring some experience which maybe we haven't got through the side."

Ewers, whose powerful game with ball in hand has caught the eye this season, said he was relieved to get his future ironed out.

"I'm really pleased to be staying on with the Chiefs," he told the club website.

"We've been talking for a little while, but now it's all sorted I can concentrate on my rugby and what I hope will be a big end to the season."