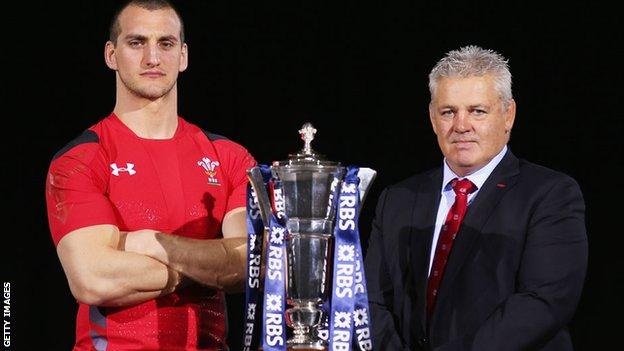 Wales coach Warren Gatland says it is unlikely captain Sam Warburton will feature in their opener against Italy in Cardiff on 1 February.

The 25-year-old flanker, who has been out since the end of November with shoulder damage, is confident he will be available for selection but Gatland is not sure.

"Probably he won't be available for the Italian game," said Gatland.

"We'll just see how next week pans out."

Gatland says he has discussed with Warburton the possibility of playing for the Cardiff Blues as part of his bid to get up to speed for the start of the Six Nations.

"He hasn't had a lot of rugby but he's not going to be too far away," said Gatland.

"We've discussed that and he feels himself he might need a bit of rugby and it might be a game with the Blues."

If Warburton does not make the Italy game Gatland is happy with the cover he has in the Wales squad for the back-row forward.

"Sam can play at six as well and we've got the quality of Justin Tipuric as well.

"It's a pretty attritional position in terms of players picking up knocks and bangs and we've just got to make sure that Sam's right and hopefully we won't pick up too many injuries as the tournament goes on."

Wales are going for their third straight Six Nations title - a feat which has never been done before.

Gatland says it will be tough to achieve but is something his squad is focusing on as they prepare for the tournament.

"For us it's nice to be able to come into a campaign with a sort of a single focus and the single focus is to do something that's potentially special," said Gatland.

"But it's a really hard tournament to win, we haven't started yet, so it's nice to have that sort of focus right from the start, so there's a huge amount of excitement at the moment and a lot of motivation as well."