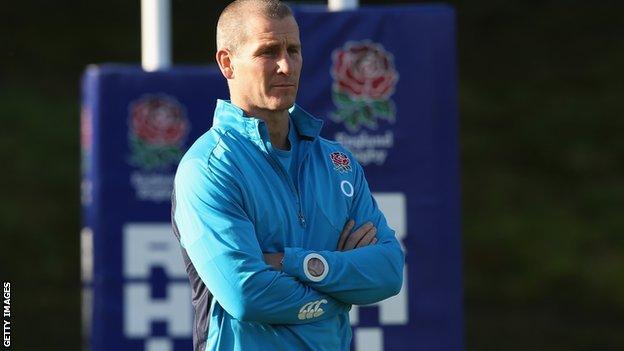 England coach Stuart Lancaster admits he faces a tough decision over whether to pitch three Test novices into their Six Nations opener against France.

In-form Gloucester wing Jonny May, 23, with just one cap to his name, could also come into the side.

"In my own mind, you don't want to put too many inexperienced players in at one time," Lancaster said.

"You want to put a young player in if you feel he is ready because, in his own development, it is an important decision."

With Marland Yarde, who made his debut in the autumn, unavailable until the latter rounds of the Six Nations because of injury, and another wing, Christian Wade, ruled out for the entire tournament, Lancaster has been forced to look at other options.

Watson, 19, and a player of "fantastic potential", is challenging the under-pressure Chris Ashton for the right wing berth.

After training with the senior squad on Thursday morning he will join up with the England Saxons ahead of Saturday's game against Ireland Wolfhounds.

The Saxons starting XV has not yet been named, but Watson will be in the match-day squad.

Lancaster said: "We want to give Anthony some senior international experience and more game time on the wing.

"The match against the Wolfhounds is a good opportunity for him.

"He's been great in training this week and to test himself against a quality Irish team will be another step up for him."

Meanwhile another uncapped member of England's Under-20 World Cup-winning squad, Exeter's Jack Nowell, is the alternative to May on the left flank.

"I would rather find out now if these youngsters can take their opportunity safe in the knowledge the other guys will circulate back into the team," said Lancaster, preparing for his third Six Nations campaign after two runners-up finishes in the past two years.

Lancaster also has a decision to make over his centre combination in Paris.

With Billy Twelvetrees likely to hold off the challenge of Bath's Kyle Eastmond for the playmaking role outside fly-half Owen Farrell, the question of who fills the number 13 jersey remains the biggest issue.

Manu Tuilagi, expected to miss the entire Six Nations, is one of four outside centres (along with Bath's Jonathan Joseph, Gloucester's Henry Trinder and Saracens' Joel Tomkins) currently unavailable through injury.

The choice boils down to giving the powerful Burrell his debut or recalling the fit-again Brad Barritt after the Saracens man missed the autumn Tests through injury.

"It is good we have Brad back in the equation and he is getting himself back up to speed," Lancaster said. "We have to decide what the best combination is and we are keeping our options open at the moment."

Burrell, 26, toured Argentina last summer and was part of the senior training squad during November but has yet to win his first cap.

Although he primarily wears 12 for Northampton, Lancaster would have no qualms about him starting in the 13 jersey in Paris.

"Luther has defended at 13, and I think this concept of inside and outside centre is slightly inaccurate in terms of how the modern game is played. Having a guy who can get you over the gain-line and a ball-player in the centres is quite a good combination."

Lancaster knows the player well, having brought him into the Leeds academy as a 15-year-old while he was playing for nearby Huddersfield.

"Luther was still raw at that point but a great physical presence and mentally he was tough. Technically he also had a good skill set and that encouraged me to give him an opportunity," he said.

"He has a had a bit of a rollercoaster ride but at Northampton his confidence has grown and he has delivered on the big stage in the Premiership and in Europe."

Scrum-half Danny Care, injured playing for Harlequins against Clermont Auvergne recently, has been passed fit to resume training on Thursday and challenge Lee Dickson and Ben Youngs for a place in the match-day squad in Paris.