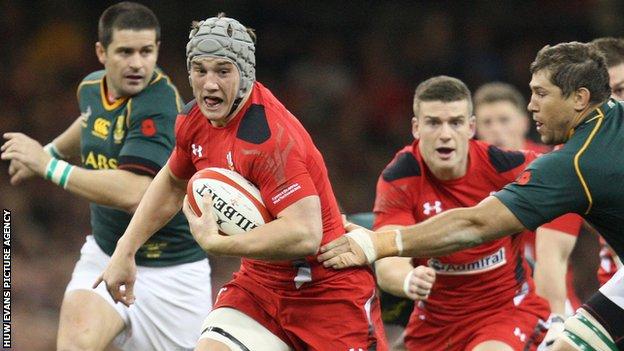 Coach Warren Gatland says Jonathan Davies could be back from injury sooner than expected to play a part in Wales' Six Nations campaign.

The 25-year-old has not played since suffering a pectoral injury in Wales' defeat by South Africa in November.

British and Irish Lions centre Davies was expected to return to action in early March, but Gatland says he could face France on 21 February.

"I think he's ahead of where we expected," Gatland said.

Wales are going for a third straight Six Nations title, something that has never been achieved in the history of the competition.

They start the defence of the title against Italy in Cardiff on 1 February, then travel to Dublin to face Ireland a week later before hosting France in a Friday night game at the Millennium Stadium.

"You know we get the first couple of games out of the way and then you get that sort of fortnight before the third game at home to France," said Gatland.

"So he may come into contention for that. He's training hard and he's making good progress."

Davies was one of the stars for the Lions in their victorious tour of Australia in the summer.

He played in all three Tests, controversially being picked ahead of Ireland great Brian O'Driscoll for the series decider.

His form earned Davies a transfer from the Scarlets to French club Clermont Auvergne, where he will move in July.

He joins a list of Welsh internationals playing in the French top flight, including his Wales and Lions centre partner Jamie Roberts who plays for Racing Metro.

Roberts, who has recently returned from injury, has to negotiate another match for his club against Toulouse in the French Top 14 on Saturday before he returns to the Wales training camp.

"I think competition is going to bring out the best in all of us.

"Scott's been in red-hot form this season, Jon is a quality player and I've struggled with injuries as well this season.

"So this Saturday is a big game."