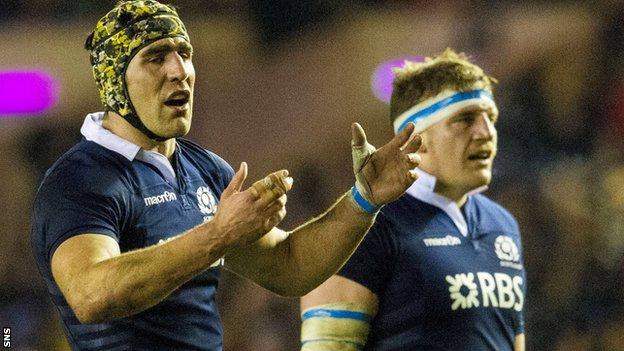 Scotland captain Kelly Brown is cautiously optimistic about the national side's chances ahead of this year's Six Nations.

The Scots travel to face Ireland in their opening fixture next weekend and Brown believes they can challenge.

"We finished third last year, the highest in a number of years, and we are improving as a team," said Brown.

"If we can keep on improving and play at our best then we will put all the sides under pressure."

And he continued: "We would like to win all of our games.

"That doesn't mean, though, it is going to happen. If we can control our own level of performance then let's see what happens."

Brown said in jest that, should Scotland travel to face Wales in a Grand Slam decider in the final round of fixtures, he will emulate his hero and predecessor David Sole by walking the players out onto the pitch.

"To lead out Scotland is a huge honour," said the Saracens flanker. "If we go there for a Grand Slam decider, I guarantee we will walk out, I promise!"