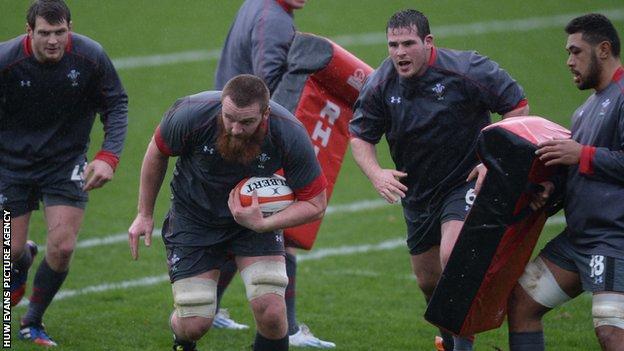 The 22-year-old had already been called up to train with the national squad last week but was added to Warren Gatland's full squad on Tuesday.

Ball's inclusion comes after Ian Evans was banned for 12 weeks last week for stamping during Ospreys' defeat in Leinster.

Wales begin the defence of their Six nations title against Italy in Cardiff on Saturday.

Jake Ball is a specimen... he's still learning. He was playing cricket three years ago

Coach Gatland will name his match 23 to face the Azzurri on Tuesday lunchtime.

"It's reward for the hard work he's put in over the last 18 months with us.

"His recent form has given him that opportunity to make that step up."

Australian-born Ball qualifies for Wales thanks to his father, who is from Colwyn Bay.

He joined the Scarlets in August 2012 having trained with Super 15 club Western Force.

Despite his call-up, Ball faces stiff competition to force his way into the starting line-up.

However, with through injury, Ball could get the chance to win his first cap during the campaign.

Easterby says Ball, who has been a regular for the Scarlets this season, has all the attributes required to do well for Wales.

"He works extremely hard off the pitch at the gym on his conditioning.

"He's a specimen. He's well developed and he's late into the game as well.

"He's still learning. He was playing cricket three years ago."

*Follow the Wales squad announcement on all BBC Wales platforms from midday on Tuesday, 28 January.