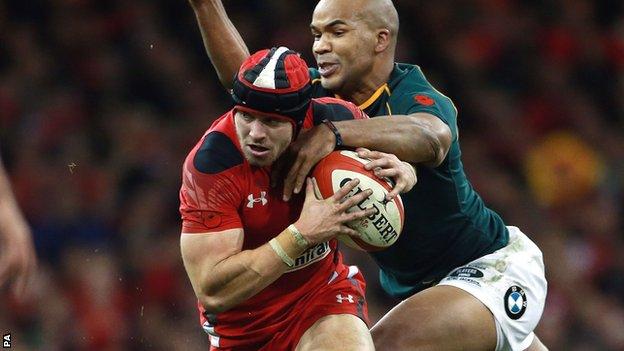 Wales full-back Leigh Halfpenny has signed for French side Toulon.

Halfpenny, named man of the series after the victorious British and Irish Lions tour to Australia in 2013, joins Toulon on an initial two-year deal.

The 25-year-old has full release for all Wales training camps and international matches.

"I believe the move to Toulon is the best decision for me and my continued development as a rugby player and as a person," said Halfpenny.

"They are an outstanding club, very ambitious, full of world-class players and are the European champions."

Toulon are fully supportive of my international desires and duties

Halfpenny, whose contract with the French giants contains an option for a third year, insisted that the move abroad would not affect his availability for international duties with Wales.

"Toulon are fully supportive of my international desires and duties and I would like to thank them for this as it was an important factor in my decision," Halfpenny added.

"As well as the rugby challenges, I'm looking forward to experiencing and embracing a new culture and learning a new language. However, until then I'm completely focused on performing for the Cardiff Blues and Wales."

Halfpenny is out of contract at the end of this season with the Blues, who along with the Welsh Rugby Union are understood to have tabled deals to keep the 25-year-old in Wales, but neither could compete with Toulon's offer.

Blues chief executive Richard Holland said: "Retaining Leigh has been one of our highest priorities... his outstanding performances for Blues, Wales and the Lions have made him one of the most prized players in world rugby.

"We put our very best offer on the table but he has been the target of a major European club with significant resources that we simply cannot compete with.

"Leigh has been a fantastic servant to the Blues and I know how hard a decision this has been for him... he will go with our very best wishes."

Reports have put Halfpenny's annual wage at close to £400,000 as the French giants seek a long-term replacement for former England fly-half Jonny Wilkinson.

Halfpenny is, like Wilkinson, one of the best goal-kickers in the world and his fine all-round game means he is considered to be one of the finest full-backs in the world.

Wilkinson is expected to extend his stay at the Stade Felix Mayol by another year, so defending Heineken Cup champions Toulon will be able to field both men next season.

Halfpenny will also find a familiar face at Toulon in Ian Evans, as the Wales and Lions lock will join the French side from Ospreys in the summer.

The pair will be among an eight-strong Welsh contingent playing in the French Top 14 next season, as Wales' leading players continue to be enticed away from the four cash-strapped Welsh regional teams.

The ongoing dispute between the regions - the Blues, Newport Gwent Dragons, Ospreys and Scarlets - and the WRU and the uncertainty over what competitions they will be playing in next season has added further pressure on players coming out of contract.

"Given the current uncertainty over the competitions the regions are playing in next season and revenues attached to that, it is understandable why players are looking elsewhere," added Holland.

"The threat to Welsh rugby and our ability to keep top players in Wales is highlighted by the fact the French game is underpinned by broadcast revenues that dwarf anything we receive from our domestic league [the Pro12].

"It's not surprising that Welsh players would choose the certainty of strong weekly French competitions over the uncertainty of the weekly club competition in Wales."

WRU group chief executive Roger Lewis confirmed that the governing body and the regions hope to solve their differences soon.

"It is no secret that we are working closely with our regions to put in place a new Rugby Services Agreement within which we hope to secure a method of retaining our top players in Wales and the WRU is anxious to progress that plan as quickly as possible," Lewis said.

"There is no doubt that playing in Wales under the gaze of our national coaches is the best place for any Welsh player to be, but in this day and age we are all aware of the financial pressures on individuals to move."

"There are fundamental issues that need urgently addressing across the whole of Welsh Rugby," said Gallagher.

"We need a collaborative and practical approach between WRU, Regions and community clubs on to how best to retain and invest in our players in Wales.

"The impact on our supporters and young players of iconic Welsh rugby stars leaving their Regions should not be underestimated, as they lose the chance to watch their heroes and be inspired week-in-week out."

Halfpenny has had a stellar year, following his Lions heroics by being shortlisted for the International Rugby Board player of the year, and was voted the Rugby Union Writers' Club Player of the Year.

Halfpenny, from Gorseinon near Swansea, was also named 2013 Six Nations player of the tournament and has scored 344 points for Wales in 48 appearances since his debut in 2008.