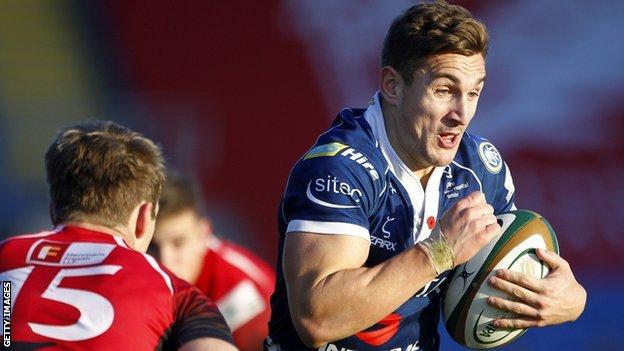 Bristol winger George Watkins will leave the club at the end of the current campaign to join Cardiff Blues.

Watkins came through the club's academy system and has scored 51 tries in 87 first-team appearances.

The 23-year-old, who qualifies for Wales through his father, joins the Welsh region on a two-year deal.

Watkins, who has scored 51 tries in 87 appearances for Bristol, has moved to the Welsh capital to pursue his international ambitions.

"George was a key figure in the club's future vision and we were keen for him to commit for the long-term," Bristol director of rugby Andy Robinson told the club website.

"Unfortunately for Bristol, George has chosen to pursue his ambitions to play European and international rugby and we respect that decision.

"George has served us magnificently in the Championship and we thank him for his contribution."

On Thursday Wales and British and Irish Lions full-back

But Blues director of rugby Phil Davies was delighted to be able to replenish his back division with the two young wingers.

"George and Owen are two talented young Welsh players who will be important for the Blues for years to come," Davies said.

"I've known about George since my time at Worcester Warriors when I tried to sign him. I have followed his progress for the last four years in the English game and he is a prolific try scorer in a competitive league."