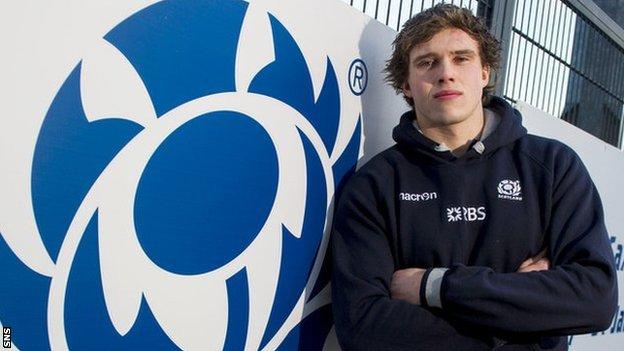 Glasgow Warriors lock Jonny Gray has been chosen to captain Scotland A against England Saxons - despite being only 19 years of age.

Gray, who was captain with Under-20s coach Sean Lineen, made his full international debut in November.

And Scotland A head coach Shade Munro said: "Jonny is a mature player.

"The feedback I received from Sean Lineen was that he was an excellent and successful captain for Scotland Under-20 last year."

Munro suggested that Gray, who was named by head coach Scott Johnson, was being groomed for a similar role with the senior squad.

"He is definitely one of the leaders in this squad and, at Glasgow, he's one of our line-out callers," said the the Scotland A coach.

"Therefore, he is creating a skill set that is suitable to leading a team.

"The A team is about developing players and captains, so this is an excellent opportunity for him to step up."

Gray was excited by the challenge awaiting him at Scotstoun Stadium next Friday and mentioned the influence of Glasgow captain Al Kellock.

"It's a massive honour to have the chance to captain Scotland A and I'm very grateful to be in the squad," said the forward.

"Captaining the Under-20s last year was a great experience and has brought my confidence on.

"I had a group of players that had played in previous years, like Mark Bennett, Adam Ashe and Will Bordill, so they were always very helpful to me and I know it'll be the same with this group of players.

"Also, at Glasgow, Big Al has been a huge influence and support to me.

"I can't wait for next week to get into the camp and prepare for our match."