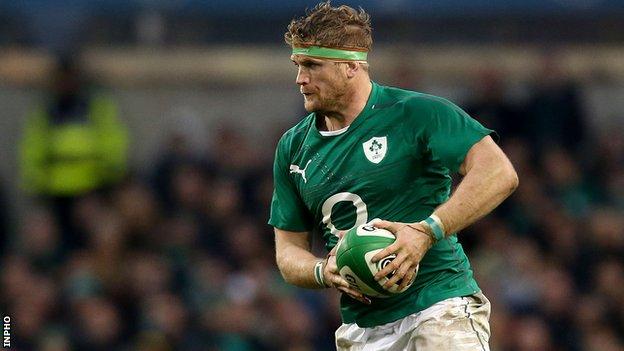 Jamie Heaslip has signed a new three-year contract with the Irish Rugby Football Union which will keep him at Leinster until at least June 2017.

Heaslip had been strongly linked with a possible move to French club Toulon.

However, like his Leinster and international team-mate Sean O'Brien, Heaslip has opted to stay at home.

"Leinster is where I wanted to continue playing and I am happy that the process is now at end," said the 30-year-old Ireland and Lions number eight.

Last week, the IRFU announced that O'Brien had signed a new two-year contract with Leinster.

The IRFU has been working hard to keep its best players under central contracts after fly-half Jonny Sexton's high-profile move to Racing Metro last summer.

In addition to O'Brien agreeing a new Leinster deal, Munster quartet Paul O'Connell, Conor Murray, Donnacha Ryan and Keith Earls have all signed contract extensions over the past two months while Rory Best is remaining at Ulster.

IRFU chief executive Philip Browne said that he was "delighted that Jamie has committed his future to Leinster and Ireland for the next three years".

"He has been one of most consistent performers and top number eights in world rugby for many years and has played a starring role for Leinster, Ireland and the Lions," added Browne.

The number eight helped Ireland clinch the Grand Slam in 2009 and has also been part of three Heineken Cup-winning Leinster teams.

He made his Leinster debut against the Ospreys in March 2005 and won his first Ireland cap against the Pacific Islands in November 2006.