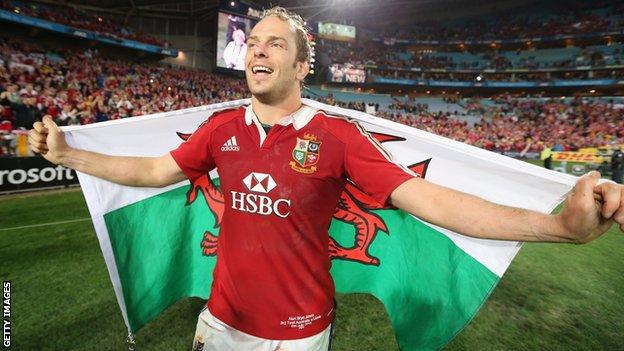 Alun Wyn Jones has ended speculation about his future by signing a new contract with the Ospreys.

The lock, 28, has won 74 Wales caps and played six Tests for the British and Irish Lions.

Jones was out of contract at the end of this season but his new deal will see him stay at the Liberty Stadium until the end of the 2015-16 season.

"I'm very happy to resolve my future, which means I can now concentrate solely on my rugby," Jones said.

"It's flattering to have received offers from elsewhere, but at this point in my career my focus is on being in the right environment to ensure the longevity of both my domestic and international career.

"It's important to me that I'm playing the right level of rugby."

The news that Jones, who had been courted by clubs in France and England, has decided to stay with the Ospreys is not only good news for his regional side but also for Welsh rugby in general.

Jones's fellow Lions star Leigh Halfpenny confirmed on Thursday that he would be next season, bringing the number of Welshmen playing in France to eight, while two ply their trade in England.

There is also hope that Wales captain Sam Warburton is close to agreeing his own contract extension to stay in Wales, although his new deal may be a central contract with the Welsh Rugby Union rather than with the Blues.

Given the uncertainty that still surrounds the game in Wales in general, we've given Alun Wyn reassurances regarding his future options

Warburton was captain of the 2013 Lions but was injured for the series decider against the Wallabies, with compatriot Jones taking over the armband to lead the tourists to victory.

To have two such leaders opt to remain in Wales will be welcome good news amid the ongoing dispute between the WRU and its regions - the Blues, Newport Gwent Dragons, Ospreys and Scarlets.

Players are also uncertain over what competitions they will be playing in next season, with a rival European competition to the Heineken Cup on the table and the possibility of the Welsh regions also playing in an Anglo-Welsh competition instead of the Pro12.

Ospreys rugby operations manager Andy Lloyd said: "Given the uncertainty that still surrounds the game in Wales in general, we've given Alun Wyn reassurances regarding his future options, but it is fantastic news that he is staying at the Liberty Stadium.

"It will give everybody involved with the region, players, coaches, staff, commercial partners and supporters, a huge boost.

"Alun Wyn has been, and continues to be, a fantastic servant to this region and is a true role model to those around him.

"A natural leader, he demands the highest standards of himself and everybody in this environment, and it will be a better place with him around in the coming seasons."

"We are delighted that a player of Alun Wyn Jones's ability and stature in the world game has decided to commit his immediate future to his region and to Wales."