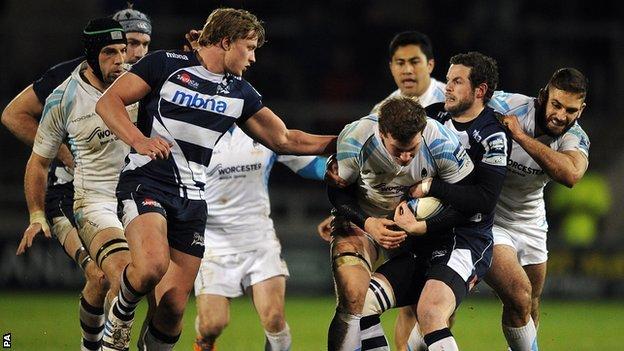 Worcester forward James Percival admits that they are keen to put right their losing record against Sale this season.

Of the 17 defeats in 20 games Worcester have suffered in all competitions this season, three have been by Sale.

But, when they meet for a fourth time, in the LV= Cup at the AJ Bell Stadium on Saturday, the Premiership's bottom club will have renewed hope.

"If we can beat them it would really breathe more confidence into the side," said second-row forward Percival.

"They've had the better of us so far but it will be a good test of our attitude."

Luckless Worcester have this week revealed the freak thumb injury suffered by Scotland international prop Euan Murray, which could keep him out for the season.

But the club have been refreshed by a first home win of the season against French side Oyonnax in their final Challenge Cup group game last weekend, followed by a week of warm weather training in Portugal.

"Wins bring teams together," said Percival. "The mood is really positive now. It's up to us to back up last week's performance by doing the same against Sale.

"We've had to train on astroturf recently. It affects the forwards as we don't have the opportunity to do some things which we would like to when playing on grass.

"But we've been able to train on good surfaces in good conditions in Portugal and have pushed ourselves hard like a mini pre-season. There was a lot of attention paid to fitness and our condition."

Now, after the confidence boost of beating Oyonnax comes the hard part of translating that into a winning performance against a Premiership side, even if it was a one who will be nowhere near at their strongest.

Sale have already beaten Worcester 26-10 in the Premiership, as well as doing the double over the Warriors in the Challenge Cup - 29-15 at Sixways, then 21-3 at the AJ Bell Stadium on Worcester's last visit a fortnight ago.

Wins bring teams together. The mood is really positive now.

But Percival points to the performance of the pack as being the key.

"The forwards had a good game last weekend," he said. "We had a point to prove. We managed well in tough conditions. We saw the game out."

Worcester bring in several more of their Academy youngsters for the trip to Salford.

Elliott Davies will make his Warriors debut at stand-off, following his return from a loan spell at National League One leaders Doncaster.

Loughborough University student Christian Scotland-Williamson, who scored in the last round against Leicester Tigers, also gets his first start at lock, while four more academy hopefuls Nick Seymour, Jack Cosgrove, Andrew Boyce and George de Cothi are on the bench.

Sale have their second string side out, without a single player who started the 26-10 Premiership win over Worcester at the same stadium in November. But they do have a strong bench, including skipper James Gaskell and England international Danny Cipriani.