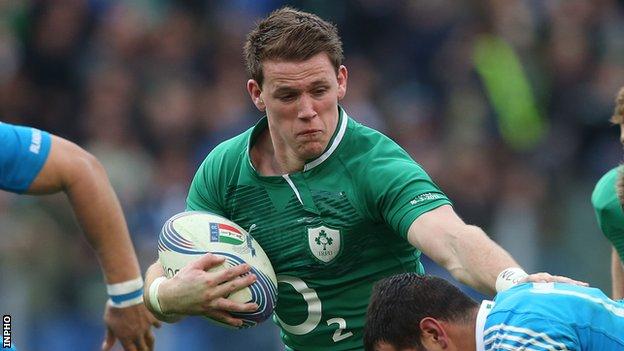 Craig Gilroy believes an impressive showing for Ireland Wolfhounds on Saturday can earn him a Six Nations outing against Scotland on 2 February.

The Ulster wing will line for the Wolfhounds in Saturday's game against the England Saxons at Kingsholm.

"You want to get out and play some good rugby and give Joe (Schmidt) a bit of a headache when selection time comes around," added the Ulster wing.

"No one really knows who Joe's going to go for."

Ireland have lost Munster three-quarter Keith Earls for the duration of the Six Nations with knee ligament damage while Tommy Bowe looks certain to miss the two opening rounds because of his lingering groin injury.

That leaves Dave Kearney, Fergus McFadden, Luke Fitzgerald, Andrew Trimble and Wolfhound squad members Gilroy and Simon Zebo battling it out for the two wing berths against the Scots.

Gilroy, 22, was a regular starter during Declan Kidney's final season in charge of the Irish and the Ulster player remains hopeful that he can force himself into Schmidt's squad.

"Last year when I was playing Tommy Bowe was fit. It was Simon Zebo at 15, and Andrew Trimble, Luke Fitzgerald and Fergus (McFadden) were all there too.

"Everyone's here now except Tommy. Everyone's been playing well for their club.

"So that's another reason why it's really important to have a good game this weekend, because who knows where you could be in two weeks' time?

"Definitely you want to produce something strong."

Gilroy suffered concussion in Ulster's win over Montpellier on 10 January but was passed fit to line out in the impressive Pool 5 decider win over Leicester last Saturday.

"I wouldn't say I'm quite at full sharpness yet but I'm definitely back to full fitness, which is good, so just coming off the back of two Heineken Cup games where we did well.

"So I'm back to full fitness now and just hoping to make an impact."

Like all the Irish squad, Gilroy has been impressed with the coaching philosophy of Schmidt who is about to head into his first Six Nations in charge of the national team.

"Joe's been very impressive so far, the detail he goes into one-on-one with the guys," said Gilroy.

"He doesn't miss anything, he's a real perfectionist and the level of detail is enormous.

"He's welcomed me back in and just said it was good to see me back playing.

"Most of us have played together a few times so everyone's pretty comfortable."