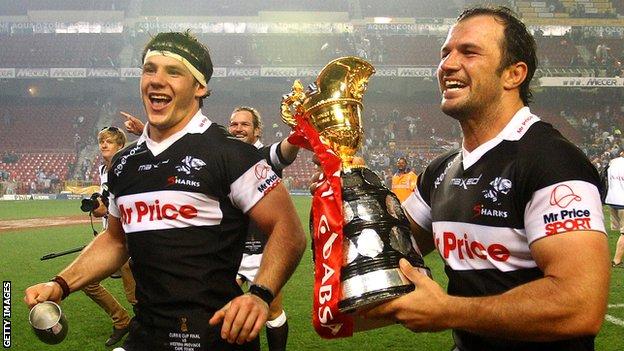 The two sides meet on Saturday in front of what is expected to be a near sell-out crowd at Allianz Park.

"Maybe this is the sign of things to come," he told BBC Sport.

"It's an overnight flight, and we'll be back at work on Monday afternoon after playing a team in England."

A tournament involving teams from England and South Africa has been mooted if no agreement over the future of the Heineken Cup is reached, and White can see it happening.

"Logistically, to fit in an extra tournament against South African sides [at the moment] will be a bit tough, but maybe that can happen in the future," he said.

South Africa internationals such as Bismarck du Plessis, Tendai Mtawarira and Willem Alberts are among a host of Springboks in the Sharks' squad to face the Premiership leaders.

"It's great because there are a lot of ex-South Africans living in London," added White. "And I'm sure they're going to enjoy some of the players they have supported as young kids playing in this country."

The game on Saturday will be White's first since moving to the Sharks from the Brumbies, who he guided to a Super Rugby final and a famous victory over the British and Irish Lions last summer.

In 2007, White led South Africa to victory against England in the Rugby World Cup final, and he says he is desperate to coach at international level again.

"I've made it quite clear I would love to coach another international team. John Smith (the Sharks' CEO) knows full well my ambition is to coach again at the highest level," he added.

"I'd like to coach a team that I feel can win a World Cup. If that means that you're going to coach in the northern hemisphere, that's fantastic. If that means you get another crack at your own country that would also be great.

"I'm never going to be embarrassed about the fact that, as a young guy, I coached national rugby and I enjoyed it. And now I've got older I long to get that opportunity again. But one never knows where. If it's in England, or Wales, then obviously I put my hand up."