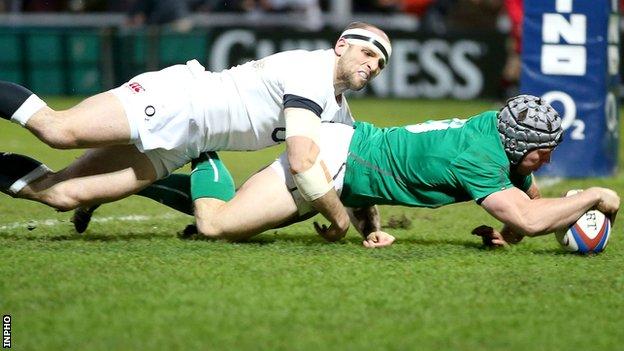 Tries in the first half by Leinster half-back pairing Isaac Boss and Ian Madigan proved enough to give Ireland Wolfhounds victory over England Saxons.

Scrum-half Boss found a gap in the English defence to touch down after five minutes at Gloucester's Kingsholm.

Anthony Watson scored the home side's only try after scooping up a knock-on from Wolfhounds winger Craig Gilroy.

Madigan got his try after taking a quick tap-penalty and wriggling to find enough space to cross for the score.

England produced a late resurgence to try to steal victory, but Elliot Daly was held up short and Freddie Burns was squeezed into touch when trying to sneak a try.

Burns, the Gloucester fly-half bound for Leicester in the summer, was outshone by opposite number Madigan whose superior goal-kicking and opportunist try could catch the eye of Ireland coach Joe Schmidt.

Madigan converted the two Irish tries while Burns missed five points off the tee on his home ground.

Burns finally slotted a penalty with a little more than a quarter-hour to play, but they were the only points of the second half as the Wolfhounds defence held firm.