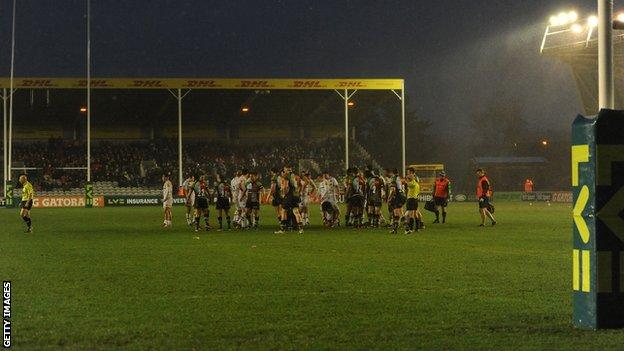 The LV= Cup group match between Harlequins and Leicester Tigers was ended nine minutes early on "safety grounds" because of gale-force winds.

Advertising hoardings and other debris were blown onto the field at the Twickenham Stoop, which led referee Gwyn Morris to take the two teams off.

Harlequins were leading 20-6 at the time and it is not known if the result will stand after the early conclusion.

Leicester could still reach the semi-finals but Quins have been eliminated.

Winger Paul Sackey, flanker Maurie Fa'asavalu and back-row forward Tom Guest scored Harlequins' three tries, with fly-half Ben Botica adding a conversion and a penalty, while all of the Tigers' points came from the boot of Ryan Lamb.

In a statement on their club website, Harlequins said: "As a result of very strong winds, parts of the stadium were blown onto the field of play and so the game was abandoned to ensure the safety of players and supporters.

"The club would like to thank stewards and staff for their swift reactions and the supporters of both teams for their understanding in the circumstances.

"The Tournament Organising Committee will decide whether the score at the time of abandonment will stand or if the fixture needs to be replayed."