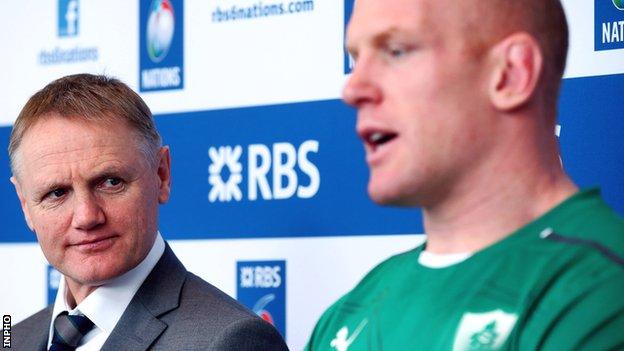 Joe Schmidt looks ahead to his first Six Nations with a mixture of excitement and trepidation.

Listen to the Ireland coach in the build-up to the opening fixture at home to Scotland, and you will detect a note of caution in his words.

Schmidt needs time to stamp his mark on the Irish squad and, although he displays the self-belief that he can succeed at the highest level, he is promising no quick fixes.

Ask him who are the favourites for the championship and he reels off an answer naming Wales, France and England.

Not that he - or the Irish players and supporters - would settle for finishing in the bottom half of the table again, after their disappointing fifth last time.

Schmidt is tempering expectations, and the autumn internationals will have underlined the size of the task facing Declan Kidney's successor.

His first match as Irish coach was an expected win over Samoa, and that was followed by a hugely disappointing 32-15 loss to Australia and the agonising last-gasp defeat by the All Blacks.

New Zealander Schmidt received Ireland's call after three trophy-filled years with Leinster where he enhanced his reputation as an insightful and demanding coach.

In his Six Nations debut, Ireland will be looking to beat Scotland in Dublin. Six days after that, they face current Six Nations champions Wales, again at home.

"It is a massive tournament. I have been at most of Ireland's matches in the Aviva Stadium during my time in Ireland and there is a great atmosphere outside the ground, let alone inside it," said Schmidt.

"I hope there is all that colour this year, plus a little bit of something to celebrate. But it is going to be a very big ask."

In the overall scheme of things, two big issues would appear to be key for Irish rugby in the build-up to the 2015 World Cup.

They are the survival of the Heineken Cup in something akin to its current format, and keeping Ireland's best players in Ireland.

Fly-half Jonathan Sexton's high profile move to Racing Metro apart, the Irish RFU have been successful in achieving the latter.

Over the last few weeks there has been a succession of announcements on Leinster and Munster players signing fresh IRFU contracts.

It is certainly something coach Schmidt welcomes.

"I know Wales are starting to look at central contracting. It is something the Irish have already made good use of," he said.

"It is a massive lift for the Ireland team to have the likes of Conor Murray, Sean O'Brien, Keith Earls and Paul O'Connell, quality players, all committing to continuing with their provinces and being readily available for Ireland.

"Sean O'Brien is nationally contracted and his services are obviously available to Leinster.

"But, it helps us be able to manage him better. Sean is such a powerful player; he has very little respect for his own body.

"It gives us a better opportunity to manage the game time he has and his collision rate."

Of course, Ireland's long-term does not include iconic centre and former skipper Brian O'Driscoll.

Schmidt persuaded the Leinster man to play on for one more year but he is part of the so-called golden generation - guys who helped the men in green to the 2009 Grand Slam - who are gradually making way for younger protagonists.

Record-breaking fly-half Ronan O'Gara has gone, with the likes of O'Driscoll and Gordon D'Arcy unlikely to be far behind.

The long-serving midfield partnership of O'Driscoll and D'Arcy - with more than 200 caps between them - is expected to start against the Scots on Sunday in an Irish team likely to contain 10 men who played under Schmidt at Leinster.

The manner of that 24-22 defeat by New Zealand in November has not been a big talking point in the training camp, Schmidt insists.

Rather, supporters will be hoping, the very fact that they were seconds away from beating the All Blacks, is cause to believe Ireland can emerge from five bruising internationals during February and March in credit.