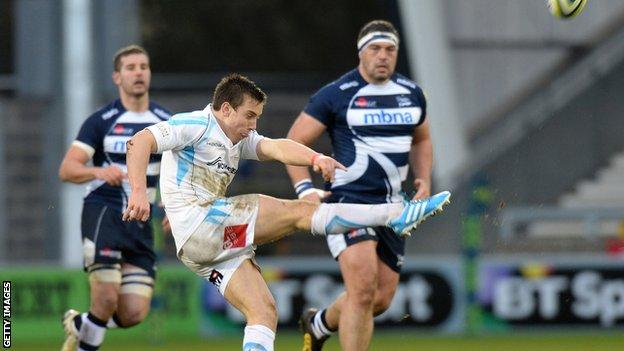 Worcester Warriors debutant Elliott Davies insisted there were positives to take once again despite a fourth defeat of the season by Sale Sharks.

The young stand-off kicked two of his four attempts at goal as Worcester went down 20-6 in their LV= Cup clash at a windswept AJ Bell Stadium.

"I thought we controlled the game well in the first half.

"Conditions were difficult and we won the kicking battle for a long time," he told BBC Hereford & Worcester.

Having trailed just 3-0 at the break to a Joe Ford penalty, Worcester were undone by two second-half Sale tries as they suffered their 18th defeat in 21 competitive outings this season under Dean Ryan.

Ford added a second penalty a minute after the restart before Davies's first successful kick reduced the arrears 10 minutes later.

Mark Easter's try, converted by Ford took Sale out to 13-3 before Davies added a second penalty 18 minutes from time to cut the deficit back to within a score.

But Charlie Ingalls became the second Sale player to cross seven minutes from the end to seal victory, with Ford adding the extras to complete his half-share of Sale's tally.

The game was the fourth of five scheduled meetings between the two sides this season, with the Sharks also winning in the Premiership and two group games in the Challenge Cup.

Worcester now have just one more chance, in the Premiership return at Sixways on 15 February, to record a victory over them this season.

The Warriors had two other debutants on display, Davies's fellow Academy products Andrew Boyce and Jack Cosgrove, who both made second-half appearances from the bench, and both will be hoping for starts when Worcester wrap up their LV= Cup group at home to Exeter this Saturday.