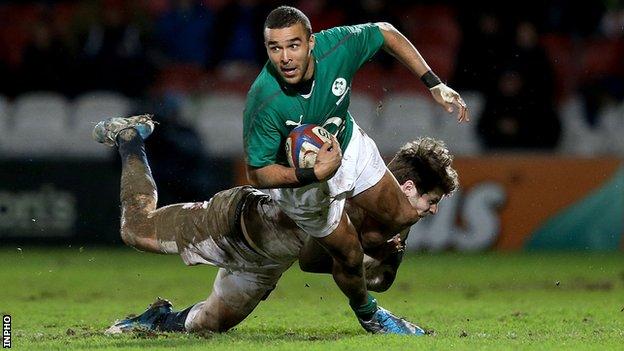 Wingers Craig Gilroy and Simon Zebo have not been included in the squad for Ireland's first two Six Nations games against Scotland and Wales in Dublin.

The pair have returned to action in recent weeks after injury and may be considered for selection later in the championship, along with Tommy Bowe.

Gilroy and Zebo were called into Ireland's extended panel for the Six Nation series last week.

Lions wing Zebo has found fitness after a foot injury sustained in October while Ulster player Gilroy has recovered after suffering a suspected concussion in Ulster's victory over Montpellier in the Heineken Cup in January.

Zebo came on as his replacement and scored Munster's fifth try in the 38-6 win, which secured a home quarter-final against Toulouse.

Both played a part in the Ireland Wolfhounds victory over England Saxons in an 'A' international at Kingsholm last weekend.

Munster's Conor Murray and Leinster counterpart Eoin Reddan are chosen as the scrum-halves, seeing off the challenge of Connacht's Kieran Marmion and the experienced Isaac Boss.

Leinster props Jack McGrath and Martin Moore are preferred to Leinster's Dave Kilcoyne and Munster front-rower Stephen Archer, who drop out of the original extended squad named by Schmidt.

Cian Healy and Mike Ross remain favourites to start against the Scots in Dublin on Sunday however.

The other forwards left out from the original panel are Connacht's Rodney Ah You, hookers Rob Herring and Damien Varley and Ulster regular Robbie Diack.

Ian Keatley misses out, while Keith Earls is ruled of the entire Six Nations after sustaining a knee injury in Munster's recent Heineken Cup win over Edinburgh.