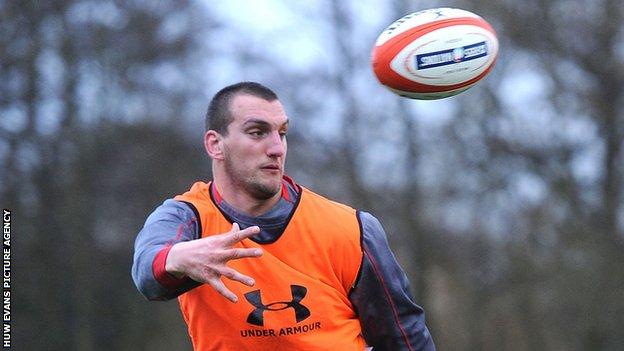 Sam Warburton will be on the bench as Wales start their defence of the Six Nations Championship against Italy in Cardiff on Saturday.

Second row Alun Wyn Jones leads the side with regular skipper Warburton not fully recovered from a shoulder injury.

Paul James is selected at loose-head in Jenkins' absence with Luke Charteris named in the second row in place of Evans.

Coach Warren Gatland said Jenkins - who has been recovering from a knee injury - was fit enough to play but would benefit from another week's rest.

Warburton has not played a game since injuring a shoulder in the match against Australia on 30 November last year.

Gatland has been encouraged by the flanker's progress in training, but has opted to start with Ospreys' in-form Tipuric.

Jones - who led the British and Irish Lions in the third Test against Australia in 2013 after Warburton was ruled out with injury - was the natural choice to take over the captaincy as Wales aim for an unprecedented third successive title.

"We are looking for a good start; we started slowly last year and know we need to be ready from the off," said Gatland.

"Italy started last year's tournament with a win over France, so they will be ready on Saturday and we need to start well and build confidence and momentum.

"It's a strong, experienced side, but there was a lot of discussion about the selection which is a great position to be in as a coach.

"We've almost everyone fit for selection which is pretty rare.

"Alun Wyn will lead the side with Sam starting on the bench and he has come through training well."