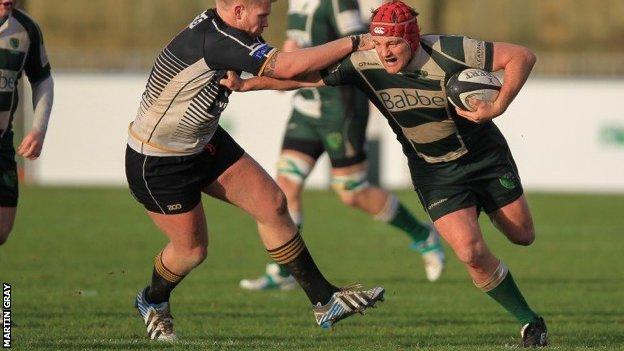 Guernsey boss Jordan Reynolds said his side have definitely come to terms with a higher standard of competition after a seventh win in eight games.

The Green and Whites beat Basingstoke 14-10 on Saturday to move to seventh place in the table.

"We were trying to find our feet earlier in the season, but we're very renowned for our style of rugby," he told BBC Guernsey.

"We've come to terms with it now and we're playing some quality rugby."

Reynolds said his side could now even start to think about exceeding their pre-season aim of making the top six.

"We wanted to be top six and if we can go top five that'll be a massive bonus for us and we've just got top keep really positive for the rest of the season," he said.

"Catching the top two is out of our reach but at the minute were seventh and I just want to keep chipping away."

Guernsey had only 17 players available for the trip to Basingstoke and Reynolds said his players had needed to dig deep to "grind out" the win.

"We got the four points we needed which is all that matters at the moment," he said.