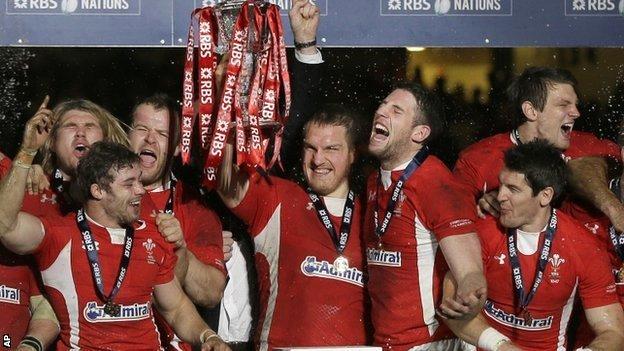 With the RBS Six Nations poised for kick-off this weekend, our resident BBC Sport expert explains why he expects defending champions Wales to win a historic third successive title.

This Welsh side has been together for the best part of four years now, and it almost picks itself. You can name 13 or 14 players without hesitation. The same can't be said of any other team in the tournament. Stability, assurance and confidence are all with Wales. With a few exceptions they are all still relatively young, but have a lot of experience. Even the younger players such as George North (21) and Toby Faletau (23) are established performers and becoming world-class players.

A Wales team for the ages?

People can go on about how Wales can't do it against the best southern hemisphere sides but when you look at the Six Nations, they would be ranked number one after the last two years, with England number two, whatever their positions [England fourth, Wales sixth] in the world rankings. You look at every area of their team and there are established players everywhere, even with a few injuries.

Gethin Jenkins is injured but you've still got Richard Hibbard and Adam Jones in the front row. Lock Ian Evans is banned but you've still got a player of the class of Luke Charteris to play alongside Alun Wyn Jones. With Warburton not starting, you've still got a formidable back row with Justin Tipuric alongside Dan Lydiate and Toby Faletau. Centre Jonathan Davies is missing the first couple of games but Scott Williams is a talented player and Jamie Roberts is still there. This team have played so many times together, they know what they have to do and how to go about it. They could probably do it in their sleep.

There are a few Welsh players coming out of contract at the end of the season who haven't got their futures sorted yet. But most of the top players have a deal in place - whether it be with a French or English club or a Welsh region. The speculation about players moving abroad has been going on for the past few years since the first Welsh players started going to France - it's nothing these players are not used to.

But Sam Warburton's contract with the WRU does have the danger of causing a small bit of friction. How does Justin Tipuric, Warburton's rival for the number seven shirt, feel about it? How many others might get similar contracts? If they don't, does it mean the WRU like certain players more than others? Will they try to bring Dan Lydiate back from France? There's no previous history of centrally-contracted players in Wales, like there is in the other Celtic countries. They are going into this new, so it's difficult to know what the reaction will be from other players.

But I think the majority will be happy to have their futures resolved and I don't think it will affect them on the field. Warren Gatland has made it clear for a while who he believes his best players are, and Tipuric is number two to Warburton at open-side flanker for the foreseeable future. They are quite different in their styles of play, with Warburton's physicality and Tipuric's footballing instincts, and both can be accommodated.

If it ain't broke, don't fix it

Wales could possibly win this championship just by playing territory and creating pressure and letting Leigh Halfpenny kick the points. That was a huge source of points last year because they were given so many penalties from scrums, but that might diminish with the changes to the laws in that area. Prop Adam Jones is still maybe coming to terms with the new laws, which don't rely on the 'hit'. But Wales still scored the most tries [nine] and conceded the fewest [three] in last year's championship, and Halfpenny is still going to knock over penalties from anywhere, so it is not going to affect them too much.

Wales won't change their style. They will still go 'round the corner' of rucks, bring in their big wingers Alex Cuthbert and North, and centre Roberts will still smash it up the middle. Then the likes of Hibbard, Faletau and Jones will be the next wave coming in behind. It is pretty irresistible really and they are good at it.

What they haven't shown enough of, and need more of, is composure in the opposition 22. Sometimes they need to change it up a bit and leave it to the backs. Cuthbert has scored some good tries coming in from the blind-side and North and Roberts have done it as well, if you look at the tries they scored on the Lions tour. Halfpenny seems to be getting better and better with every game he plays, and if they get him more involved in the attack, that is another weapon the opposition has to worry about. I don't think they need to change too much though - you don't change something that is not broken.

Either Gethin Jenkins or Ryan Jones are normally captain when Warburton isn't available, and those two are injured for Wales' first game against Italy. But lock Jones has shown what a good leader he is, so there's no drop-off there. Roberts is also back at centre and ready to take charge of the defence, while you've also got Mike Phillips' experience at scrum-half, Adam Jones in the front row and Lydiate, who led the midweek Lions last summer, in the back row so I don't see many problems.

The beauty of Gatland's tactics is that if someone is missing, somebody else just slots in. You can't necessarily replace world-class players and there is no doubt Davies will be missed - just remember his last 10 minutes or so in a Wales jersey against South Africa in the autumn - but Williams is a talented young guy who has already played in some important games.

Wales are going for three in a row and there has been a lot of talk about using that as motivation in the build-up. But there is so much drive within these players anyway, it won't be at the forefront of their minds when they take the field. They will just want to win each game by a point or two if need be.

So is a Grand Slam on the cards then?

Wales are not so far ahead of the rest to make me think they will win the title easily. There are three games they could potentially lose - to Ireland in Dublin, France in Cardiff, and England at Twickenham. The passion, emotion, tradition and history of the Six Nations means there are usually a lot of wrongs that need to be put right the following year in each fixture and that impacts on the games.

Wales' match with Ireland in Dublin a week on Saturday is a case in point. Their contests over the last six or seven years have been some of the best in the tournament from a neutral's point of view, and they tend to be very close. What will be different about this next one is how much hype there will be beforehand after Warren Gatland's decision to drop Brian O'Driscoll for the final Lions Test in Australia. I am sure Gatland will get the odd boo and the Irish players will be trying just as hard as ever, but with the additional incentive of wanting to prove a point, especially those who were eclipsed by Welshmen for a place in that final Test victory over Australia.

Even if Ireland win it doesn't prove anything really, because that Lions tour has been and gone. But it certainly adds some more spice to what is already going to be a fiercely physical confrontation. Playing England at Twickenham doesn't hold any fears for Wales anymore, but like their home match against France - whose pack can be a match for anybody - it will be very tough. I don't see them winning all three of those key games, so I don't think it will be another Grand Slam.