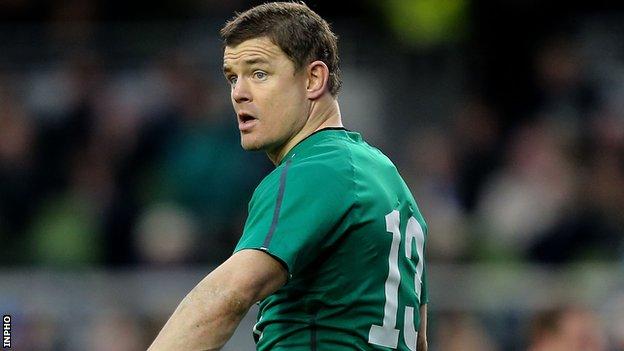 Brian O'Driscoll has stressed he has no hard feelings towards Warren Gatland over being dropped for the final Lions Test against Australia last summer.

Former Ireland captain O'Driscoll played in the first two games for the British and Irish Lions, but was left out for the deciding match last July.

Lions coach Gatland came in for fierce criticism, but the team he selected won the third Test in Sydney 41-16.

"I do not have any animosity," said O'Driscoll on Tuesday.

"What happened, happened and I do not have any ill will towards Warren.

"I think, when it was raw afterwards, your emotions are a bit different and time does heal all wounds.

"What I will look towards is trying to be involved in a team that potentially can beat his team.

"But that is next week - we have a game this week."

O'Driscoll was speaking at an Ireland pre-Six Nations media conference in Dublin ahead of Sunday's opening game at home to Scotland.

His appearance in front of journalists this week is an indication that he is unlikely to face the media again next week in the run-up to the game against Gatland's Wales side.

The legendary Ireland centre's thoughts on Gatland appear to have softened since last summer.

In September, the 35-year-old admitted he was still hurting over his surprise omission.

"When you are left with disappointment that way, you can't but feel a little bit of resentment," he said.

On Tuesday, O'Driscoll made it absolutely clear that this Six Nations was definitely his last.

"Nothing has changed. Just because it is the last one, it doesn't add any more incentive. As a professional, you are expected to deliver.

"It is about treating the competition for what it is - a brilliant one and a difficult one to win."